June 06, 2019
Up and a boiled egg breakfast with Lorraine. Two foxes passing through our garden. A day for sending manuscripts out. Spent several hours assembling three poetry submissions and a short story submission. The short story was rejected in less time than it took to get it ready by a magazine in the US. A rapidity never experienced,  I had resubmitted it by the end of the day.

Off to Marks and Sparks today, to replace the boxer shorts Lorraine had got for me at the weekend. I chose the right size and presented them along with the wrong un's and receipt for a box of shortbread. not having noticed the receipt Lorraine had left me was wrong. They were fine about it though.

Went to see Helen, buying some fancy biscuits en route. They were coconut and Helen doesn't like coconut. Met her son Josh again briefly. Listened to the new and hard to compose section of the Opera she has been working on. Part of it is a musical interpretation of a helicopter which is interesting, and strangely anxiety provoking. Discussing the final scene of the opera, and Helen played me the ending of Tristan und Isolde by Wagner.

Walked home in what had become a beautiful afternoon, listening to The War of the Worlds, the action at one point reaching the village of Edgware.

Back to work in the evening, and a tentative offer of some work up in the smoke next week working with Keith.  When Lorraine got home we watched the end of Fargo season one. Jolly good it was too.

Some of the roses in Preston Park. 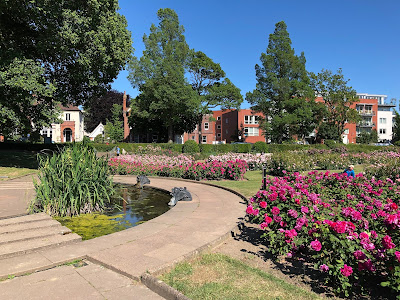