Martians in the woods

June 05, 2019
Up and refining the short story Little Horrors, which I have decided to rename The Bestie. Little Horrors is a name I will hang onto though. A good title for a collection methinks. One of my faults in writing prose is overuse of a word. For example part of this story is set in a University, and I used the word University too many times, which gets a bit tedious, but is one of those things that it easy to overlook even when you read a MS several times. Found a website called Word Frequency Counter, which you can paste a whole document into and it will tell you how many times every single word crops up. Obviously words like I and You and lots of conjunctions crop up as most heavily used, but an offending overly repeated word, such as the eight times I used University, becomes extremely easy to spot, and thin out.

An interlude this afternoon walking in woods around Hollingbury Hillfort and the golf course. The weather is cool and fresh at the moment. If you are prepared to double back a surprising amount of walking to be done there in trees. Saw dozens of rabbits, met a fox on a path, a jay, and very few people. I was listening to the new audiobook collection of H.G. Wells Science Fiction stories.  The War of the Worlds narrated by David Tennant. Interesting too for the glimpses of the heathland and fields near Woking in Surrey that the aliens arrived at. The book was written in the 1890s. There is metal martian tripod in Woking which I don't remember seeing.

Tom here today, and coughing ominously as he left. Yet another fault found on the Boeing Max, which is one of the planes in the fleet he works on.

Cooked and when Lorraine was home from Pilates, we ate and watched some episodes of the first series of Fargo, starring Martin Freeman, who is excellent in most that he touches.

Below the remnants of a car in the woods. 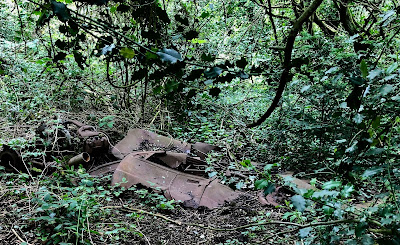