June 18, 2019
Working still for my pals in Paris today. Sent a load of ideas over first thing which weren't much liked, and spent much of the day trying to come up with better ones. Paid the solicitor's bill first thing, and was phoned this morning by them to say they had already deducted it from the amount paid me yesterday from Janet's estate, and would refund it. The woman totally charming about it, improving my impression of them.

Bob phoned and had a nice chat with him, although I was racing the clock a bit so had to cut it short.

Three short walks today to get me up to my 10k. A few showers during the day in preparation for thunder tonight. It being particularly lively over Eastbourne as we went to bed, the sky flashing to the east of us.

Lorraine home late. I cooked and listened to the whole of In the Court of the Crimson King as, wonderfully, King Crimson's entire catalogue (with the exception of USA) is now on Spotify. Never listened to the ITCOTCK (as prog heads call it) album in one sitting and in full before. Lots of textures. Work pal Slug was off to see the latest version of King Crimson do a 50 year anniversary concert tonight in the Royal Albert Hall.

The cover is unforgettable and disturbing. It was painted by Barry Godber, who died at the age of 24, apparently the face image is based on his own in a mirror. It always leapt out in record shops in the 70s. 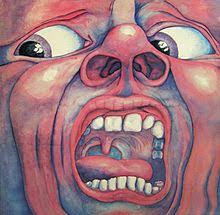 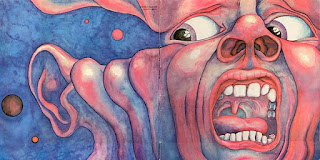 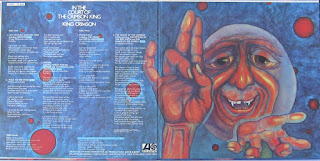 Barry Godber In the Court of the Crimson King