Matty and Isy in Brighton

June 01, 2019
Lorraine and I went into town this morning. Lorraine went to give the folks at C&H fabrics a box of biscuits for the staff as a thank you for helping reunite Pat and Maureen when they lost each other at the shops. Very kind they had been.

I went straight to the station, which was full of purgatorial crowds emptying out of the trains and swarming in the lemming-like to the seaside. I met up with Matty boy, Isy and their exemplary little bairns Elsa (5) and Harry (3), who are currently angelic children. Great to see them, and Isy who I have not seen for ages. We stopped into the garden of the Battle of Trafalgar, where Lorraine soon joined us. There we had some food and some drinks in the garden, as it was a gorgeously sunny day.  Then we all moseyed down backstreets to the busy seafront, but close to the remnants of the old pier. There we had ice cream and sat on the stones as the children took turns in standing down by the sea, and it was all really nice.

Meanwhile John and his band had crash in a van on the motorway. Everyone was okay, but Lorraine had to go and collect John and his kit -- and they lost their gig.

I went home with Lorraine, and had some to-ing and fro-ing with Charlotte who is editing the Skelton kids story. While Lorraine was out, I managed to get youtube playing on TV from where I could stream the Liverpool v Spurs European cup final from Madrid. Lorraine arrived just before kickoff. The game itself an anticlimax. Both teams had swashbuckled off and on during the year, so this was a  it of a damp squib.

Below for some reason no photos of people, but a black and white snap of the old pier with seagulls. 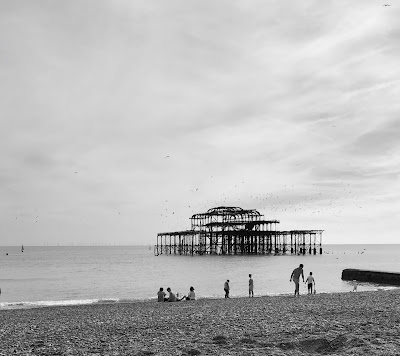