Roaring into the year

January 05, 2015
Not quite the flying start I wanted, being more like the Wright Brothers than a jet plane. I was in constant pain all night and wide awake despite taking two sleeping pills. It was only at sometime after four did I drift off having wedged myself into a corner of the gold sofa. Nights are hell at the moment.

Lorraine and Beth off early. Beth pausing for me to snap some shots of her for an extras application. I started work at 8 but had to slump for a half an hour at ten, but felt much better for it. The rest of the day was productive making large mindmaps of all the things that are to be done, and slowly beginning to catch up on my backlog of correspondence. It feels like I have been away for two months. Luckily I have a reading in the Poetry Cafe on Wednesday, which offers a bit of focus to this first week, and emails with Robin.

In the afternoon off to see Janet, for a chat. Ken sleeping in his room. Poor Ken has had much to contend with in the last year and most of it unpleasant, as has Janet. Still, lovely to see Janet as usual. From there I walked to the back crackers, where I had my back cracked, limbs stretched, muscles poked and was relieved of some cash. Amy, the efficient and pleasant chiropractor assuring me that things will improve.

Home, and Lorraine back from work shortly after me. She cooked a delicious lean chicken dish in a sauce of fresh coriander, ginger and lemon, with brown rice. Beth not smoking, and all of us now resolved not to eat our own bodyweight in chocolate each day.

Downloaded some music that John sent me by people called Snarky Puppy, which is rather excellent, like a mixture of pop, prog, funk and jazz.

Spoke to Mum and Toby, who is flying back to Canada tomorrow and having seen Gerald a couple of times. Sadly he returns sans the hat he was sporting on the beach with us.

Below a photo of the first heavier than air flight. 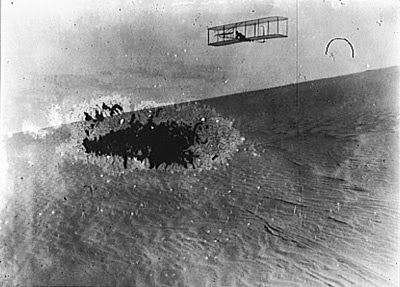