January 12, 2015
Another night of not sleeping. Determined this morning to strive for discipline, despite having matchstick eyes. The first four hours dedicated to creative work, as I am unable to think of anything I'd rather be doing that reading and writing poems at the moment - such is the result of hearing fantastic poets last night. Turns out David Harsent won, which I wasn't expecting but thoroughly deserved. I personally got down the start of something or other.

In the afternoon walked through the park and down to the bank, after ten minutes in there exited into a deluge. From London Road up to see Janet and Ken, where I arrived sodden. A chat and cup of tea with them, discussing the Charlie Hebdo business, and the colours that Janet opts for when making fabrics and other diverse subjects before heading off to the back crackers in Kemptown. Given a painful going over which involved muscle releasing too, including the jabbing of thumbs to the most hurty spots, stretches and crackings. How much difference any of this is making I'm not sure.

The sea rather wild and inhospitable when I glimpsed it, and the radio in the waiting room of the Chiropractor's discussing the recent beach deaths.

A bus ride home and, as both Lorriane and Beth, were very late home from work after bunging some baking potatoes in, I simply watched the kitch Starship Troopers again, one of the most enjoyable SF romps ever, with much slaughter of alien insects who were asking for it. 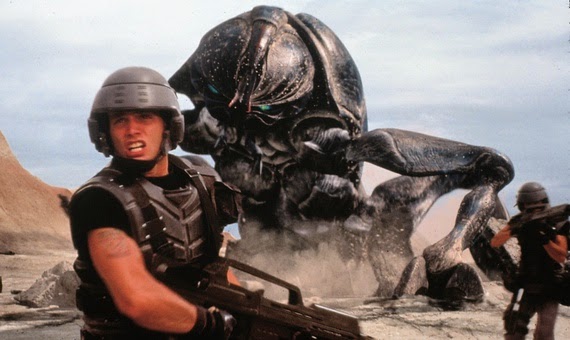