April 06, 2019
Down to Brighton Station, where we caught our train with bags of time up to King's Cross. Brighton fans heading up to Wembley on the train. The best laugh of the day for me was seeing one emerge from the first class cabin, with a rubber seagull head covering the entirety of his own, bellowing Seagulls! Seagulls! (Brighton football club's nickname).

Had time for a leisurely cup of coffee there looking down on the concourse. There was an flashmob style mini concert of children playing music. The fact they were all wearing bright orange sweatshirts meant the blending in part before they all showed themselves needed a little work.

Then in the train, crossing many rivers heading north up to Edinburgh again. Lorraine had booked us tickets and we had a pleasant journey. England bright and clear, Scotland dreich and damp but beautiful nevertheless. Happy to be back in Edinburgh. We hopped into a cab and were soon in a street called Temple Park Crescent in an area of town called Merchiston. This street tenement lined, and we were soon climbing up a slightly gothic spiral staircase to the top of the tenement, where Sam and Jade have an excellent flat.

Once settled we went out to a cheery but rather noisy restaurant bar. I had fish and chips and Chieftain beer. Jade had a vegan meal and Lorraine and Sam shared a seafood platter. From there we went for a wander and ended up in The Canny Man's, which is an absolute jewel among pubs, where I felt instantly at home. It promised 250 Whiskies but I simply had a few beers, as Scotch in general is a tad wasted on me as the better ones just taste like Famel syrup to me, which is a cough medicine from my childhood.

Below children playing in Kings Cross station, in the Canny Man's, the bottom one has Sam standing at bar before a veritable library of boozes. 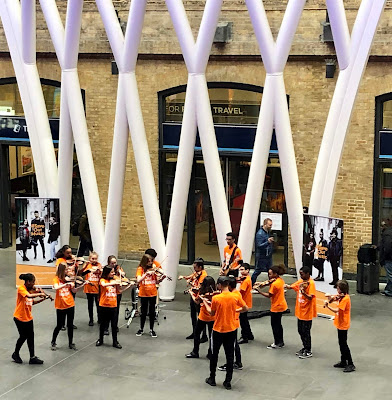 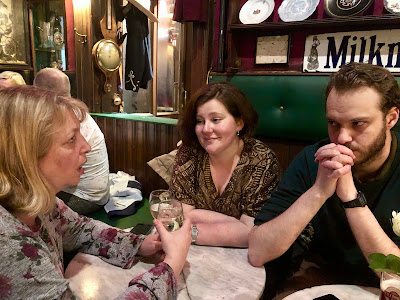 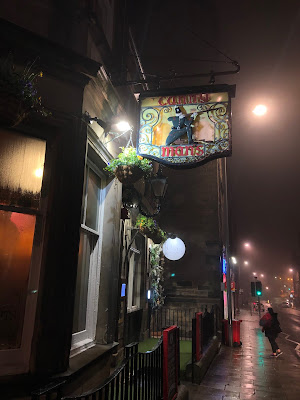 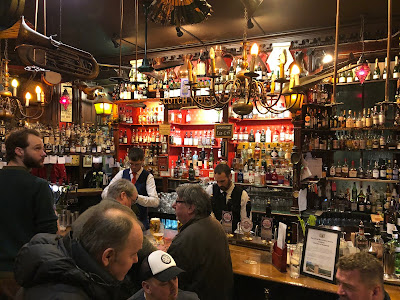