April 02, 2019
Only a poltergeist-lite scraping on the roof this morning, and the sound of a burner as new roofing was laid meant that I did not have to abandon my own office. Picking up the threads of my horror story, currently called Nothing compares to you. A note from Val in Paris wanting me to urgently look at something, but she sent the wrong file and then was uncontactable for a few hours. The right file arrived just as I was stepping into the gym, so I sloped down to my favourite morally unsound Starbucks and worked there till it was done, and I was able to return to the gym. A good session in there.

Home and a bit more work before I cooked. Spoke to Kevin as he delivered our Share of the Crop tray, and said I had met Sam and Eva last night. Lorraine late tonight, but I cooked a large chicken and veggie stew, which we ate happily, watching Fleabag, and Star Trek before boofing off to bed.

Brexit an endlessly depressing background. Since the shameful day this country voted for Brexit,  it was obvious that enacting Brexit would be a legislative nightmare. Astonishing then that politicians seem only now to be grasping that there is no permutation of Brexit that does not leave the country worse off -- some of the swivel eyed far right still want a 'no deal' Brexit, to ensure the UK is utterly on its knees when it leaves. The country is divided like never before. I can see why Brexit voters are feeling betrayed too. They were asked to vote on Brexit, told a thousand lies, but they voted and won, then they were told that the deal on leaving the EU would be 'the easiest in human history' so why is it all turning into a nightmare?

This meme currently doing the rounds made me smile a bit. 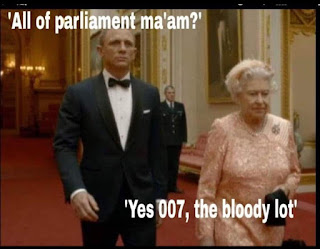 Brexit Nothing compares to you Starbucks