April 23, 2019
Up early. A heatwave induced pesky mosquito lurking around our heads all night. I biffed against the wall in the morning, and it exploded in a bright splash of blood. My blood as it turned out. Bastard.

Lorraine cheerily off to school, looking forward to seeing the children's little faces. I started work early, but soon heard a knock on the door. To my surprise there was Ken, armed with a card from Lorraine, having recently driven a great dane over from Ireland. A swift cuppa before he had to set off for work. Resuming I was phoned by Anton for a chat, which I did while searching for my new ink pen. Thank God found it after ransacking the house in the pocket of my dressing gown. Somewhat put off my stroke by emails relating to Janet later.

Good news is that Matthew the editor of Horla has been in touch and was very complementary about The Dark Fish,  which he had published last year, and wondered if I would write some stuff about horror on their site, an offer I am delighted to take up. Also have decided to go with Charlotte the editor to edit The Second Kind of Darkness her work in the example chapter was thorough and excellent. I also finished my editing of The Dream Home, and have sent this off to Jeremy in the hope he might like it for the Frogmore Papers.

In the afternoon popped down to town to meet Chris Williams in Bond Street Coffee house, where we had a nice chat over a coffee. He enthused about a documentary about Woody Guthrie on iPlayer, which I now must watch.

Working outside when I got home, though it is getting colder and overcast.  Then inside to cook for my lovely wife, who returned home still cheery.

Here is a picture from the decking of the stones, and Brian. We are going to plant more plants, and have more pots. 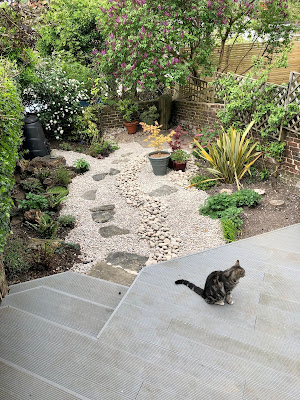