April 21, 2019
A beautiful Easter Sunday today. Lorraine and I working in the garden this morning, generally tidying and sorting things. Also assembling the table in what will be our craft room, and moving things about in there. I managed to drop a concrete paving slab on my ankle, giving my leg a scrape on the way down. No real damage done, although it hurt a lot and my anklebone ached afterwards.

Showered and off in a taxi to Anton's house as it was Oskar's birthday today. He is thirteen. Did the usual reeling at the thought that my godbairns are now both teenagers. Good to see Anne too, who had been cooking up a storm. Anna there too, which was nice as I had not seen her for a while, and caught up a bit with her.

Gave Oskar his pressie, and found him on fine form, and has recently joined the Army Cadets, which he seems to like a lot. It was entirely his own idea. He said he'd been learning hand signals for silent communication, and marching among other things. He is now noticeably a bit taller than Klaudia. Anton put him at the head of the table for his birthday meal too. Meanwhile Klaudia and I agreed a date to go to town for our next theatrical adventure.

A delicious lunch, with lamb and turkey, a gorgeous trifle, and lots of chats. Sat with Anne drinking limoncello, or the yellow death as Anton calls it. Home then, walking or rather floating down to the taxi rank and home.

Below the birthday boy with Anna and Anton, below Anne, Anna, Oskar, Anton, Klaudia and Lorraine. 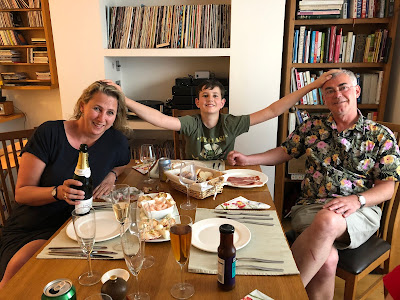 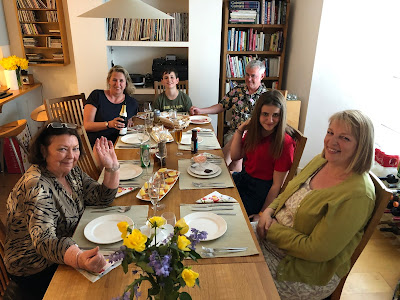