Off to see Pat and Maureen

March 31, 2019
Clocks forward today. Lorraine, Betty and I off to Ashford today to see Maureen and Pat. It is Mother's day, and also Lorraine and I will be away in Scotland next weekend, when it is Maureen's birthday.  A nice day there, Lorraine's brother Ken had cooked lamb, which I had not eaten in ages. And Pat and Maureen's old pal Cindy was there too, and it was nice to see her. Beth and Maureen a bit of a double act At one point Maureen screwed up a ball of paper and string and, looking at me darkly, said I throw my rubbish where I throw my love, and chucked it at me.

Lorraine and I snuck away for a walk down to the church nearby, and down to a little stream that when she was a child was surrounded by fields that she and her brothers used to swim and catch sticklebacks in. Now it is bordered by new buildings and on one side by the high speed rail link to the Eurotunnel.

Home again listening to the wittertainment Kermode and Mayo talking about films. Out of Blue sounds like a winner. Dropped Betty off at her place, and then straight home and in bed not too late.

Below Lorraine revisiting the past, and Maureen, Cindy and Pat. 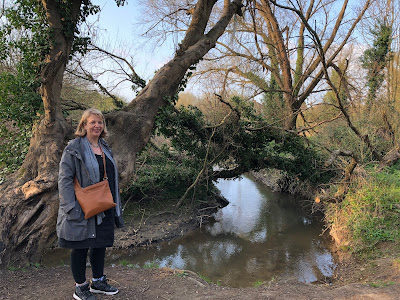 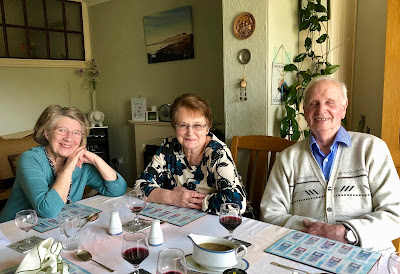