March 28, 2019
Hurrah, time to do a bit of my own work this morning, or at least start to make lists again. A bit of writing this morning, and then Ben called around at lunchtime as he asked me to help him install a window in a tricky site in a street close to mine for half an hour.

Quite fascinating to see how this installation was done. The window was rather beautiful had many broken bits of glass, which Ben had not only replaced but cast himself, making dimpled glass by  baking the glass onto clay tiles he had made, adding dimples by rolling a marble on the clay, and then setting the melting glass on it, thus producing dimpled glass to match the probably victorian window.

Slightly nerve-racking as for various reasons the window had to be installed from outside the house, and I had to lift it up to Ben on the ladder. A window of that size is quite heavy and there is a lot of give in it too. The window a bit big, requiring folding of the lead to make it fit. Mission accomplished, then inside to tie it in, and then putty it into position. Learned a lot, but also had a laugh chatting about stuff. The process took at least two hours.

Home, determined to go to the gym, but then there was a smidge of feedback on the job that I am doing for the new agency. Turned this around, and then zoomed down to the gym. Wasn't done till quite late. Spoke to Lorraine and we decided to meet at the Park View for a bite to eat, as the place has been refurbished outside and in for the last couple of weeks, although not wildly different it certainly felt a bit fresher and still smelled of paint. We ate a nice pie in there and had a couple of beers and I felt generally lucky and more optimistic than I have in a long while having now completed my recent glut of freelance, which means the Kenny coffers will no longer be in the unusually dire state they have been for the last few months.

Below Ben installing a window he has renovated. 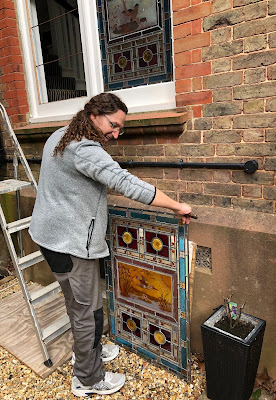 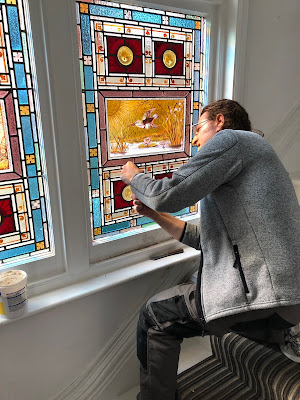