An old rose comes in handy

March 18, 2019
Up and working early on the project for my Parisienne pals, but only after I had blurted down in about half an hour, a complete short story of about a twelve hundred words. Wrote itself guv'. Currently called The Dream House.

Broke off for a bit after lunch to zoom off to Preston Street to take photos of Silvana and Richard, as Richard asked me to help. They have a Bossa Nova duo, called Bossa Love. Felt rather stressed by this as work was full on, and they were both looking at me a bit blankly. The venue, called The Medusa, was a nice little bar, and the owner very friendly. However it was a very dark and cluttered interior. I took them outside but it was raining, so all in all not much joy. Leaped on a bus and then made it home quickly and was able to resume work on the animal health business which I sent off at the end of the day. The day a bit of a slog.


Very pleased to see Lorraine home a bit earlier than usual, who sorted out some salmon and salad and couscous for our dinner, which was rather good. We watched Star Trek and a few other bits before an early night.

Below Silvana and Richard, with the trusty This Concert Will Fall In Love With You rose. I always knew it would come in handy. 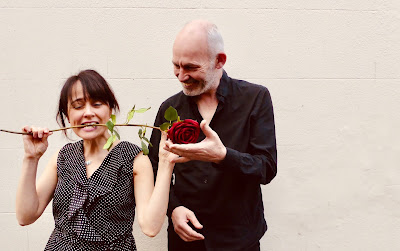