March 07, 2019
A long night's sleep. Lorraine dressed in pyjamas for national book day, brought me up a nice cup of tea which I had with a paracetamol breakfast. She left still in pyjamas for school. However, as the day wore on, I was feeling a bit perkier than yesterday, although still a well under par. Walked to Shadric's studio in the sunshine, pausing to look at the hosts of golden daffodils. A steady day's work. Noticed some of Shadric's designs and an enormous pencil drawing of his grandparents, which I really liked.

Went for a brief scurry around at lunchtime, simply to free up my seizing back, which is slowly improving too. After work, walked home and guiltily bought a bag of fish and chips, as Lorraine had an arduous and lengthy governor meeting tonight. I went to bed before Lorraine came home, as I was still feeling unwell. I had spent the evening listening to my audiobook of The Exorcist, which is very interesting and as much about the idea of faith as it is spooky stuff, and also had a chat with mum.

Below, daffs looking cheery, a quick walk from Shadric's studio, a squirrel spotted through one of his studio windows, showing the trees that the wind soughed in all day. Lovely. 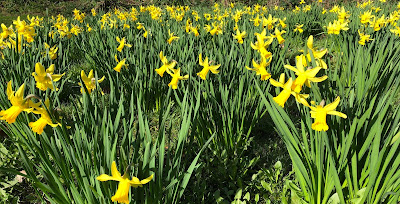 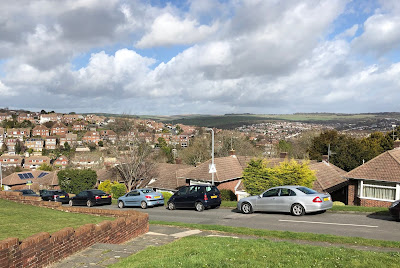 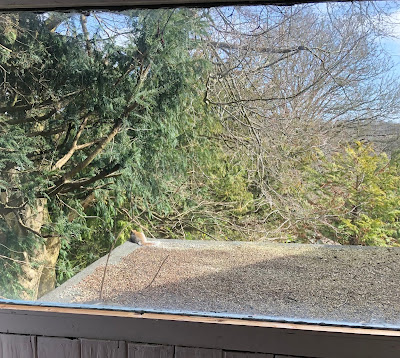