March 26, 2019
A rather glorious day, with all clients at bay, and time to think and read, and write a little of my own stuff. Woke up feeling lethargic and a bit rubbish, but decided to go to the gym early, and found I had gas in the tank and this perked me up lots. Read another story by Ligotti today, called Flowers of the Abyss, and started reading his philosophical work The Conspiracy Against the Human Race. Also researching horror podcasts. I am becoming increasingly interested by doing my own podcast in one form or another.

In the evening, after cooking a rather spectacular chicken stew, and fed Lorraine leaving her about to watch The Great British Sewing Bee, I sloped down to the Rose Hill Tavern to watch a Jazz combo and meet Ben. Good to see him, and had lots of chats in between the music. He really is a lovely man.

A strange night, with a troubled but talented saxophonist/clarinettist who kept complaining about his borrowed equipment, apologising for wrong notes that nobody could spot and so on. He also refused to continue to play on a song half way because it didn't make any music sense. Last time I was there he was playing piano and clarinet.

Despite this kind of thing, the band played well and the place was full and full of people of all ages listening hard. Ben and I were sitting right at the front. A few people did showy dances, you could hear one middle aged couple's feet rasping about on the floor during quieter bits.

Assorted jazz cats, who may or may not be called Sunny Side. All good fun. 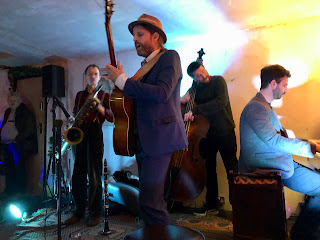