Flowers at the edge

March 17, 2019
Working for a few hours today on the various freelance bits. Lorraine went to the gym for a leisurely session while I had the desk manacles on. Afterwards when she came home we ate some hot cross buns and went for a small walk down to the walled garden, looking at the twisty branches of the magnolia trees, and hellebores and other fragrant white flowers. Then down to the wee Sainsbury's pausing at one of the pubs at the bottom of the hill, called The Crown and Anchor inn, and spontaneously deciding to go in it, as it seemed to have been refurbished and we had never been in there.  Nursed a pint in its high ceilinged spaciousness for a while, and chatted. It smelled of polish. Then to Sainsbury's to buy some cheese and dreamies for the cats.

Home and a vegetarian supper tonight, we tried cauliflower steaks, slabs of cauliflower put into the oven at a very high temperature for a short while. Lorraine put olive oil and cumin and paprika and pepper on them, and they were tasty with a cheesy sauce and roast potatoes, and veggies. A healthy Sunday dinner.

A day of footie action, Brighton making their way into the semi finals of the FA Cup by beating Millwall on penalties. Chelsea losing again.  It's all going wrong at Stamford Bridge, and it is depressing to watch.

Reading the stories by Thomas Ligotti still. They are a bit hit and miss, but occasionally they enter a darkly pessimistic world all of his own. The story I am reading now Vastarien, is a wonderful story about a world the protagonist only sees in dreams, and an occult book he buys that was written for him alone.

Went to bed after watching another lengthy episode of Endeavour. Boofed down on the pillow, and my head suddenly full of creative ideas for my own writing. Made an effort to memorise them, before  gratefully slipping into sleep.

Below magnolia flowers on the edge of Preston Park. 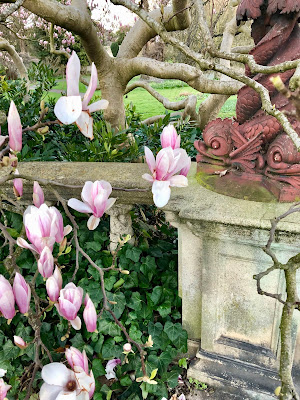