July 20, 2013
Much needed slow, water sipping kind of day, and it was cooler too in Brighton. Spot of work first thing, followed by quite a bit of free-range lounging about and spending time simply chatting. Lorraine and I off in the evening to see The World's End movie at an early-evening showing at the Duke of York's.

Had a nice cup of tea and really enjoyed this comedy with a poignant undertone, and I think I preferred it to Shaun of the Dead and Hot Fuzz both of which were good fun too, had a few laugh out loud moments too, which is always a good thing in a comedy. Based around a bunch of middle aged guys attempting again a pub crawl they failed to complete when they were 18, and the evening going horribly wrong due to an alien invasion. Loved the sense of things getting completely out of hand which of course may happen during a pub crawl.

Below still from The World's End. 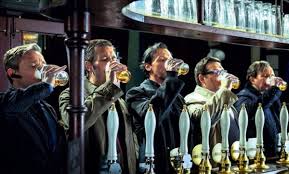