July 24, 2013
Up to the smoke again, another hot day, worked diligently and fairly cheerily. At lunchtime off to Waterstones bookshop on Gower Street and drifted happily about the several floors, and buying a collection of essays by Susan Sontag.

Home on the sweaty hot train, and then down to the beach to meet Lorraine, Beth and Rosie. Beautiful evening and we ate fish and chips on the pebbles, looking at the sea which was as far out as I'd ever seen it. The sunset was lovely, colouring the white clouds that looked like they had been painted on the blue sky with a brush. It got quite cool afterwards, and we ambled off the beach.

Crossing the road into Hove we experienced a traumatic attack from a weird insect. First it flew into Rosie's mouth and was expelled with a screech by her, then it crouched dazed on the floor and we examined it. I think it was some sort of small cicada, Rosie began speaking to it in French, whereupon it became enraged again and flew into Betty's hair and hung on tenaciously. Cue much more screeching. I wrestled it from Beth's hair whereupon it gripped my finger surprisingly hard until I managed to get rid of it in the grass.  We hurried away and the insect, clearly furious, followed us across the street and into the park, until we managed to lose it somehow.

Traumatised we went to The Farm pub for a refreshing drink, where I was accosted by a man at the bar, who said he hated the music that was playing in the pub, and had requested the music that had been stored on the Voyager spacecraft instead. This man skilfully evaded, we bumped into L's pal Lorraine Miles. Then to Rosie's house where Lorraine drove us home.

Below a large gull snatching up a person into the sky, the evening beach, sunset over Hove with brushstroke skies, and Betty on the beach. 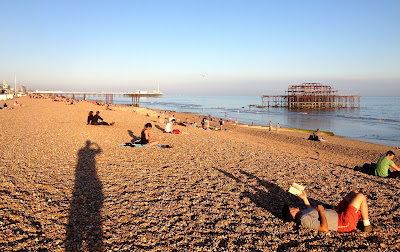 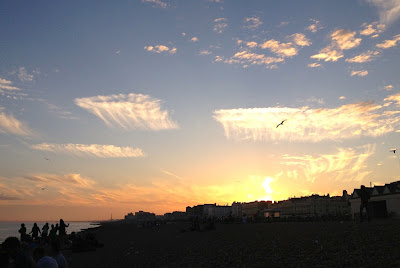 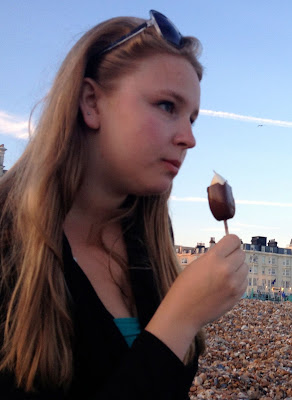