Pizzas with Toby and Mum

July 22, 2013
The train dragging itself late into St Pancras. Writing more of my book on my lap for a while, until I gave in and played a few rounds of the hugely addictive Candy Crush. London sweltering today, and the office little better.

At lunchtime off with Karam, Slug and Alan to a local pub where we sat in the sun on a cobbled area of a pub called The Lord John Russell. Drank a pint of Fosters shandy baking in the sun discussing among other things the resilience of Londoners in the war.

Working on cough medicines during the day. Work done I walked across town to The Salisbury to meet Toby and Mum. Very good to see Toby, who has tufty hair and a tiny new manbag, but otherwise seems in fine form. He and Mum had been walking about in Hampstead during the day. Caught up with some gossip and chatted generally before crossing the road to a Spaghetti House, which was on the borderline of annoying, but that may have been the heat. Ate pizza hungrily and had another good chat.

The call of the seagull was heard fairly early as Monday is the mother of all school nights. Bade farewell to them at Charing Cross and I made my way to Blackfriars where I caught the Brighton train. Blackfriars station now rebuilt and the platforms span the Thames, and you get a great view from them, with a full moon in the sky near the Shard.

My smartphone peeped with the information that the Royal family had spawned again, and a future King is born. Walked past The Blackfriars pub where I heard a man outside speculating if the new baby would be called Wayne. I think King Wayne has a ring. Homewards on the hot train and eventually home to Lorraine a little before 11.

Below poor, noisy smartphone snaps of the Shard and the moon, and a bit of the Thames through the glass with my reflection looming over it in a sinister way. Should have taken photos of Toby and Mum instead. D'oh. 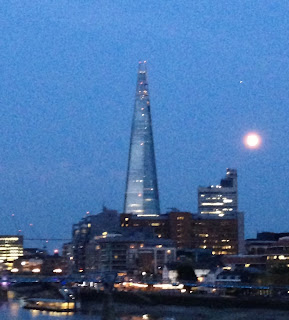 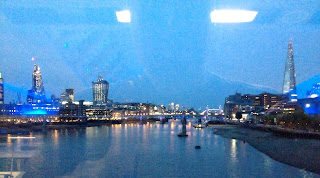