July 07, 2013
A much-needed slow start to the day. Up gradually and stiff from carrying things yesterday. L and I drawn to the seaside as it was the hottest day of the year. The big Paddle Around the Pier event was on, and Beth was working in the VIP tent. After ambling through the crowds, passing the stalls and fairground bits, the ukelele stage, where various uke bands were playing, the dance teacher's stage, we sloped into the VIP tent, and sipped a cold drink looking out at the sunny activity and the sea beyond. I like being a VIP, and am resentful of being a NotIP. Smiley lady mayoress came in looking hot in all in her finery, who Beth said ended up doing some dancing in the adjacent area.

After chatting with Beth, Lorraine and I went to sit on the pebbles of the beach by Hove, enjoyably chatting about weddings and life in general. People leaping into the water and children hobbling over the pebbles to screech at the waters edge. The water looked pretty cold, but the sea was crammed with swimmers, boats, a big orange lifeboat, people standing on surfboards and paddling and so on. In the sky a lone pilot was doing loop-the-loops in the sky.

Basking like this had created something of a thirst, so we drifted inland through the Pavilion Gardens drawn there by the sound of a brass band, thence to The Basketmakers with the clear and distinct idea of a cold lager. On the benches outside we found Matt, John, Irish Tom, and Anne and Dave Matt's parents. Joined these for a hour or so chatting happily and absorbing cold beer before heading home.

Loraine quite excited about Andy Murray winning Wimbledon, and we watched the highlights of it later. Found myself won over by Murray grit and determination he showed. First British men's competition winner for 77 years. Weasel politicians at centre court trying to leech themselves to success by association.

Below a great many ukelele players, a glimpse of the crowded beach with L in the bottom left, and a brass band playing in the Pavilion Gardens. 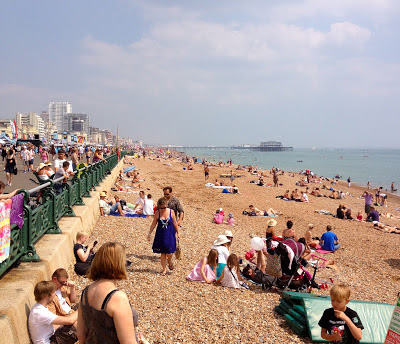 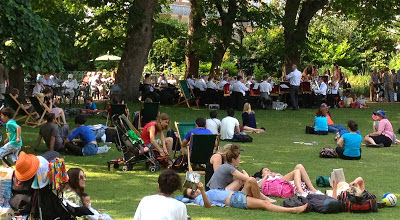