Salad and my struggle

July 10, 2013
Another phew what a scorcher kind of day in Brighton. I sauntered off to the gym late this morning after a fairly robust writing start to the day. A hot and sweaty business, but any feelings of virtue swiftly erased by glimpsing myself waddling out in sumoesque glory from the showers afterwards. Bah.

Thence to Starbucks to drink tea, where I wrote for a while longer despite the presence of a young American woman with the one of the most window-rattlingly loud speaking voices I have ever had the misfortune to encounter. Even several tables away, with my earphones in, I could barely hear myself think. If you were on a sinking ship, however, she would be exactly the sort of person you would want alongside you on the tilting deck as the lifeboat approaches in the dark.

Thence to Sainsburys where I met Lorraine and we sped home armed with salady bits. Some of which we ate when we got home.

More work in the afternoon, a brief chat with Mum and then I prepared more salad-based repasts in the evening as Lorraine was bogged down with work. We went for a nice walk in the park afterwards, and discussed house business, and looked at flowers. Home again and I settled down to read Mein Kampf as I'd read something by Hannah Arendt in my researches who said that Hitler had mentioned soap advertising while in the course of banging on about propaganda.

Interesting to read bits of this book I had only read about.  I obtained a free pdf from a link on the wikipedia page.  I have to say not the worst written book of all time, and if it hadn't lead to such appalling outcomes it would seem quite comic. I was reminded of the pompous character of Augustus Carp Esq. How did this absurd, laughable little egoist manage to become such a monster?

I learned that in Nazi Germany copies of Mein Kampf were given as free wedding presents to marrying Germans. Poor sods.

Below the immortal Augustus Carp as a young man. 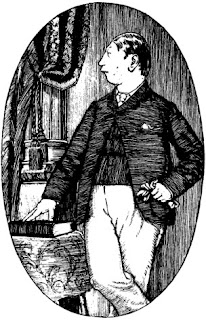