Gassing in the pub

July 28, 2013
Up curiously early possessed by the idea that going to the gym at 8:30 was deeply sensible. En route met Reuben and Clare and the four boys at the bus stop as they were catching a coach to Gatwick. Had a long chat and joking about having been nominated by the City of Brighton to see them off. Instead of going to the gym, however, I came home and went back to bed having discovered the effort of standing up and talking more than enough.

Two hours later L and I got up for a second time, and Lorraine cooked breakfast, which Toby slid down for. I had also to dispose of the body of a large dragonfly one of the cats had brought in. Then I went back to the gym, walking there with Toby who went off to lurk in the North Laine and find a place for coffee. I started gingerly, but soon felt quite good.

Home again, and had a shower.  While getting ready to go out again, Sam sent me a touching note about L and my marriage. As I was finishing my reply, I happened to be sitting next to Lorraine on the bed, and Brian the cat entered making a strange noise and carrying a rat. Lorraine screeched into my ear really very loudly, and it was then I discovered rat wrangling is my department.

Then a walk in Preston Park, through the wildflower plantings, and took Toby to look at the walled garden.

Then it was time to eat. We made off to The Eagle, where we had a fine Sunday roast. L and I had pork belly and it was fab. As we  forked this down we were joined by Matt and John, and Irish Tom. Spent a leisurely late afternoon and early evening in the pub. Anton came to see Toby too, and hang out for a chat after a marathon stint of looking after the kids. A really enjoyable few hours. Good for Anton and Toby to see each other again. Drinks sensibly interspersed with food and soft drinks, but left me looking forward to a bout of teetotalism.

Home and Lorraine Toby and I watched the final episode of the first series of The Returned, before sloping off to bed.

Below wild flowers, and gassing in the pub, left to right Matt, Toby, Lorraine, John and me. 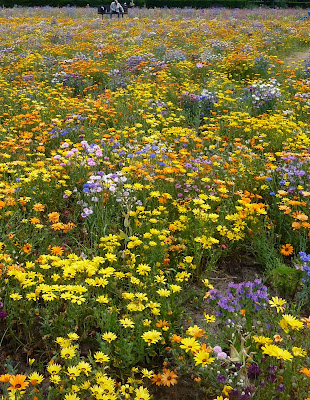 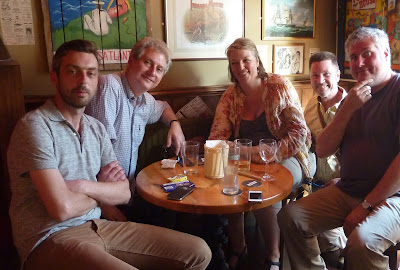