Shakespeare in the Eddy

July 12, 2013
Slightly unfocused this morning, and spent some time working on the wrong file. However, eventually made some progress on the book during the day. Lorraine working at home this morning too before heading off to a meeting. I made off to the gym, then to Starbucks where I worked for another couple of hours, despite the attentions of an infernal hell-child banging the back of my chair.

Also wrote to Helen in Germany. She and her daughter Katy have translated my Heidegger poem, to be exhibited at the Heidegger Archive to help celebrate the 125th anniversary of the great man's birth. Amazingly kind.

Another gorgeous day however. Home for a light salad supper, before Lorraine and I went off to The Eddy, which has now reverting to an earlier name of The Edinburgh (it will always be the Eddy to me), to watch the latest incarnation of The Shakespeare Trio: The Shakespeare Heptet. This evening's configuration included Richard of course, plus Steve Cartwright plucking a banjo, Claudius on flute, and a nice woman called Sam on vocals. The big news was that Dipak was playing with them again, and Lorraine and I had a good chat with him. The Eddy has no tradition of staging music, and the locals were not interested, and the band were poked away in an unlit area to the side of the bar. It was a game of two halves with the first half being much better than the second where they had to compete against a noisy bar. Although this new configuration has its moments, it lacks the clarity of the Richard and Dipak version.

Still really good for Lorraine and I to talk to the boys again, and meet Sam the singer. Talking to Steve about shooting clay pigeons, and both Lorraine and I enjoyed ourselves there before creeping home to eat some toast.

The Shakespeare Heptet warm up. Dipak (who is obscuring Steve in the corner), Sam, Richard and Claudius. 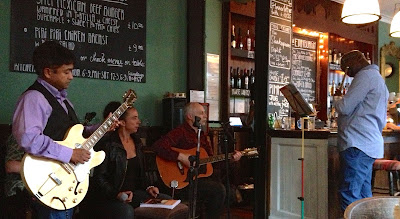