Two drinks on the first

May 01, 2019
First of the month, and after writing for a couple of hours, I caught the train up into London to meet Mum in the Salisbury. We shared plate of nachos, and chatted happily over a couple of drinks. I was telling her how much the diversity in my musical taste was down to her exposing me to things like Stravinsky and Miles Davis when I was a nipper. Not to mention all the trips to museums and art galleries. That kind of stuff makes a big difference I think, and we were lucky to live in London and be close to so many cultural riches. Mum reminded me that she was 79, and she really is remarkable taking a break from Mas and zooming into town on the tube to meet me.

I made off then to Hammersmith, to meet Matty boy for a long overdue catch up. As I was early I took a nostalgic stroll past the riverside offices I worked at from 2000-2007 plus a few bits of freelance afterwards. The area all around it, which once was a huge piece of fenced off wasteland is now full of upmarket apartment blocks and so on. Rather well done I think. Hammersmith bridge closed to cars at the moment. Walked past the The Blue Anchor and the Rutland Arms, pubs I first drank in during the late eighties, over thirty years ago, first with pals like Bob and occasionally Carl, then post work drinks. For years I worked and lived a stone's throw from the Thames.

So to the lovely old Dove to meet Matt, and we squeezed into the smallest bar (space for half a dozen at a squash) and caught up on all the news, and drank a few drinks that needed drinking, as well as the gossip about mutual friends. Matt has commenced recording the voiceover reading of a former colleague Andy Hastie's time travel adventure books which do well on Kindle, which he is enjoying.

A couple of hours there, and we had to set off home. Matt jumping into an uber. I walked back to the station, by the river for a bit, squawking parakeets flying in small groups across the water.

Home to my lovely wifey and cheese on toast.

Below with Mum in the Salisbury, a nice bit of Thames mud, and Matt in the country's smallest bar in the Dove. 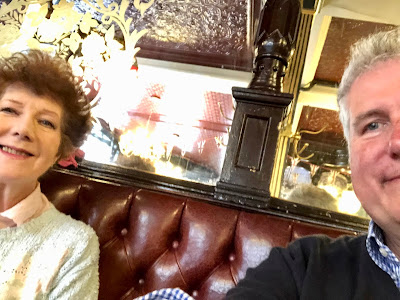 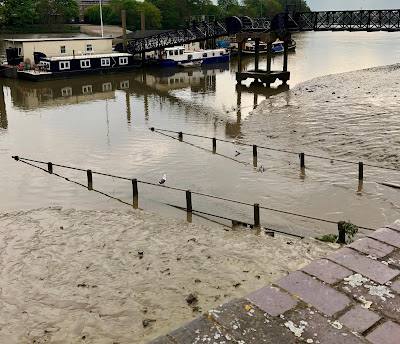 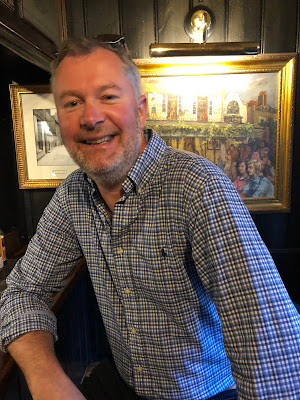