May 19, 2019
Up fairly early this morning and after breakfast we drove off to Carolyn's house where she was having a gathering and seeing bits to raise money for her charity project in Nicaragua, The Forgotten Children of the Land of Lakes and Volcanoes. Had a nice cup of coffee made by her friend Martin Antonio Ruiz Hernandez in Ometepe Island, who gave her some to take back with her. Bumped into Lesley and Derek in Carolyn's gorgeous little garden, had a nice chat about Guernsey and other things. Enjoyed this morning.

Then off to a garden centre where we bought some soil and a raised vegetable bedding container. This proved to be galling, as there was a problem with one of the bolts which meant we had to wait ages, and were given a discount but sold something with a dodgy bolt that we are going to have to replace or rectify. Felt pretty cross by the end of it.

Late in the afternoon a burst of work in the garden, creating a new area for plants and stones. We had fun doing this, and it is all looking rather nice now I think.

I wrote this blog at 8.00 on Monday morning, and this is how it is looking. 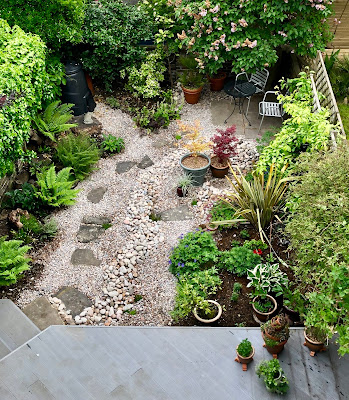