A day out with Bob

May 24, 2019
Travelled up to London today, and met Bob in Trafalgar Square. A children's protest against the trashing of the planet going on. Bob said he saw one placard that said, keep the planet clean, it's not Uranus. Bob and I repaired to the Mitre and had a pint of soda (B) and soda and lime, me, and discussed what to do with our time. We opted to visit Goldsmiths Centre for Contemporary Art where we saw the How Chicago! Imagists 60s and 70s exhibition which featured the work of Roger Brown, Sarah Canright, Jim Falconer, Ed Flood, Art Green, Philip Hanson, Gladys Nilsson, Jim Nutt, Ed Paschke, Christina Ramberg, Suellen Rocca, Barbara Rossi, Karl Wirsum, and Ray Yoshida. They all took shedloads of drugs by the looks of things, but we enjoyed the art. Bob is great to see art with in general, although he always points at the art, arresting his finger half a centimetre over the surface, which always makes me nervous.

From there a few beers at a nice pub, full of art students, called The New Cross House, sitting in the garden, where there was a building with no windows that students could smoke in. We were there, feeling a bit ancient, among the bright young gender-fluid things. A nice place though.

Then a bit of a snark hunt for a decent curry. Ended up back near London Bridge at a place called Mango, which was pricey but decent. Lots of chatting all the time with Bob of course. We'd not caught up for long time, so there was lots to say.

Getting home a bit of a nightmare, I got on the wrong train, and phoned Lorraine who was with Beth, and Beth texted me details of how to get home. My app does not seem to work any more for that kind of thing. Home at about 11:30 after a long and fairly sober journey home. Crept gratefully into bed.

Below Victoria Station, a child posing for her dad carrying a socialist worker placard saying system change, not climate change. I watched as he tried to get her to pose with a clenched fist, but she couldn't quite get it. Two pieces from the Chicago exhibition, The Four Seasons (1974) by Roger Brown, A Benefit Paiting of the Hyde Park Art Center, and Elcinda (1973) by Ed Paschke. 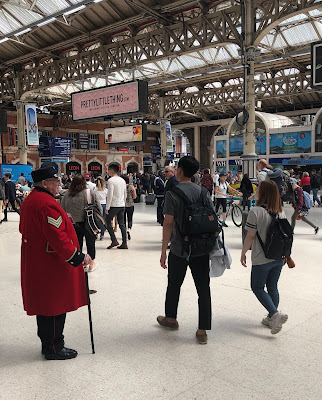 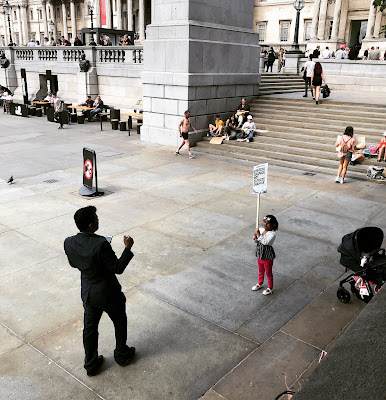 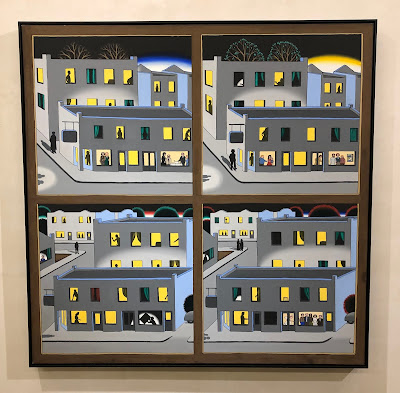 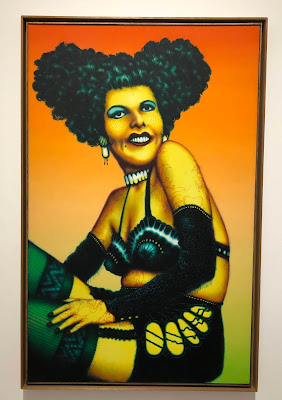