May 09, 2019
Waiting for my brief from Paris to come through, and just about to chase them at the end of the day. Then it occurred to me to look at my spam folder and found it there from Tuesday. Gah. Especially as I had made Val a favourite on my mail folder. Means I looked a bit of a chump when I had to fess up to the French and will now have to work over the weekend to catch up to deliver it on Monday.

Otherwise not a day of high drama. I worked on The Inheritor, which is still a tantalising few squeaks away from being ready.  Walked into town and bought a battery for my watch. Walked home under threatening clouds. Over lunch I watched the last of the first BBC series on iPlayer of A History of Ancient Briton by Neil Oliver, I'd been looking at over the last week or so. Interesting stuff. That early patchy history is something I find fascinating. His journey around sites in Britain and Ireland is fascinating, and reveals a civilisation and early industry that shows that the Ancient Bs were actually rather sophisticated.

Below saxifrage, a succulent and some thrift poking out of our pebbles. 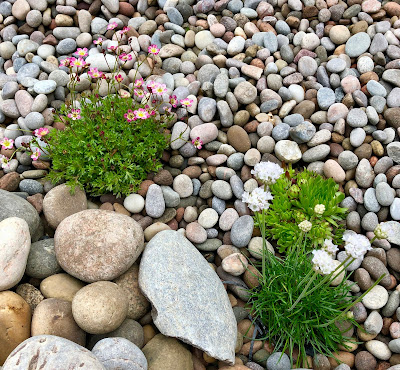 A History of Ancient Britain Neil Oliver The Inheritor