May 02, 2019
Tucked indoors working on things today, I had drawn up a list on the train going up to London yesterday, and I simply did them this morning. They were mainly to do with publishing my children's book on kindle. In other news a magazine came through with a poem of mine, Thunderstruck, but it had been misformatted and so looked weird. So it goes. When I looked at it later noticed Robin had three in there.

Got Matthew G Rees, my new friend in horror's short story collection through today, and read the first story Keyhole, which gives its name to the collection. It was excellent.

Didn't go to the gym, but instead did planking for about 45 seconds, and some other exercises with the wee lady's dumbbells Dawn gave me. Better than nowt.

When Lorraine got home we walked off to vote in the local elections. I had to nip in the bud the efforts of one of the party workers whose role seemed to be to knock all day till you voted. The polling station a lot quieter than the Brexit vote. Home, and fishcakes and lots of vegetables. Lorraine tired and we had an early night.

Below a fox in our garden, snapped through the kitchen window. He is a regular visitor now. 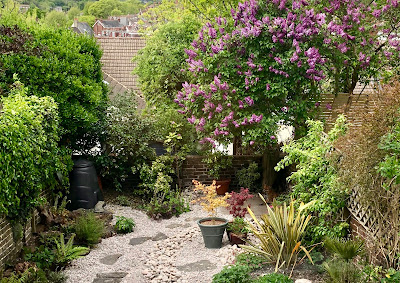