May 16, 2019
Feeling positive this morning, and as if I have all the components for a new phase at my fingertips. Now I have accepted the idea of putting things on kindle, I will also put my dormant marketing project on there too. It was sufficiently interesting for at least one publisher to call me in to talk about it, and the other rejections I had were because it was a bit niche. Amazon is the perfect medium for niche stuff, so I will give it a go too. The children's book is now with an editor. So damn the torpedoes! This buoyancy fine till one of the poetry MS I sent out yesterday was rejected in record time. Gah. Swings and roundabouts.


Lorraine came home early, and we went off to Phoenix arts building for 4:30, where Sue Kay and Madeline had organised a tribute to Janet. There was all kinds of interesting work there from Janet's archives, a cookbook she had written, and letters and several publications and editorships, even her old PhD thesis which I read and am thanked in the introduction to with Maggi her Mum and Ken, lots of embroidery, and some gorgeous delicate flower studies. There was a needlework session run there too. We sat in a ring, and said a few words. Madeline had organised this. Nick Goodwin was down with his wife, and Nick told the story of them meeting on a train in Paris, I was able to read the poem I had written for Janet and Ken's wedding, and also I discovered along with the the bits of memorabilia on tables, the few words Janet had asked me to write for Maggie to say after she died and read those too. Ray then brought out a travelling loom that he had built that Janet had invented. I did not know that they had known each other since the 70s. Sue Kay then said lots of insightful things about Janet, including the observation that she brought people together and this group of people wouldn't be here unless it was for her.

Then we went to the North Laine Brew house and had some food and drink and more mingling. Enjoyed this, Hus and Reem and Kata and Bren joined us too and it was good to catch up with them. Nice to chat to Sue Kay and Madeline too. All in all a very healing occasion. Nick Goodwin seemed to have needed it too. Sue and I were talking about Janet's idea about doing a blog called the last lily pad, that she wanted to write about her final days. Unfortunately she was already too ill to be able to do this. I think I will try to write a poem about this at some point.

Lorraine and I home by cab. I sat up after Lorraine had gone to bed, and watched a couple of episodes of Family Guy as an antidote to everything before bed.

Below one of dozens of little watercolour sketches Janet made, and the copy of a few words I had written out for Janet having read them at a gathering for Maggie, Janet's mum, after she had died perhaps twenty years ago or so. I had no copy of this. Not exactly a poem, but it did the job at the time emotionally. Also a frog in our back garden bucket pond. 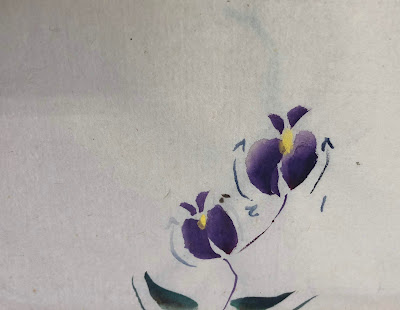 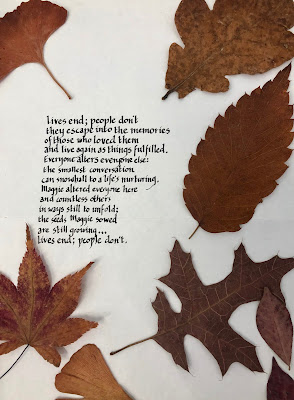 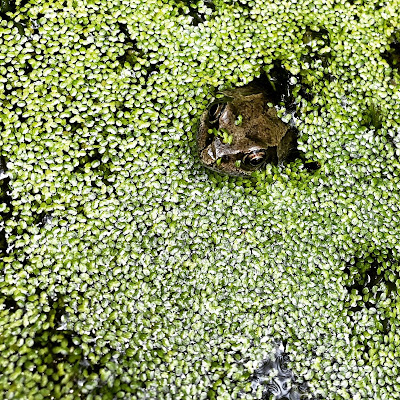