May 18, 2019
Up late, after breakfast in bed. Lurking in the garden discussing our next steps.

Lorraine went to a Bolney W.I. meeting this lunch time. I did little and when Lorraine came home again, we went off to The Brighton Tavern, and met Matt there with Reuben and John Hood and others. Matt and Reuben are moving to Yorkshire. Lovely to chat to Matt who I have not seen much of for some time. Usual chatty throng at the Tavern, with Lorraine finding herself attached to a nice and rather drunk man called Alec who kept telling her how wonderful she was. John left soon after we arrived. Also met Tim, a very talented poet and pianist, who arrived with a baritone horn for Matt. Much hugging of Matt and we were very sad to see him go, although it was great to see him so excited about moving into a new house, which he has bought. Felt like the end of an era for me, although Matt and I have not worked together for several years now, working with him on This concert will fall in love with you and other pieces, was one of the most enjoyable things I have done.

After fond farewells Lorraine and I had a bite to eat at the wee tapas place in the North Laine. Found ourselves sitting next to Claire Turner on a ladies night out, about to see a play in The Warren.

Home, with news of Manchester City beating Watford 6-0 in the FA Cup, the largest margin of victory since 1903. City have won the domestic Treble for the first time, and I bite my thumb at it. Meanwhile we watched the end of Eurovision, a dire performance by Madonna, the excruciating points awarding and the UK, whose song I have never heard, taking last place. To bed.

Below me and Matt looking crazed, and Lorraine's new pal Alec, Reuben looking like he was going to slap his forehead, and Lorraine outside the Tavern. 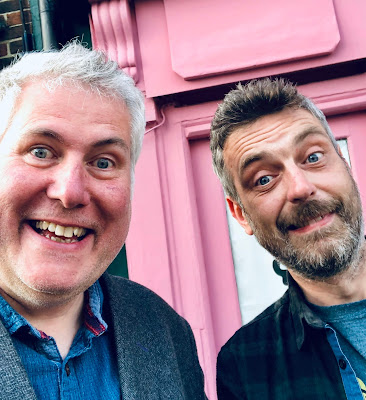 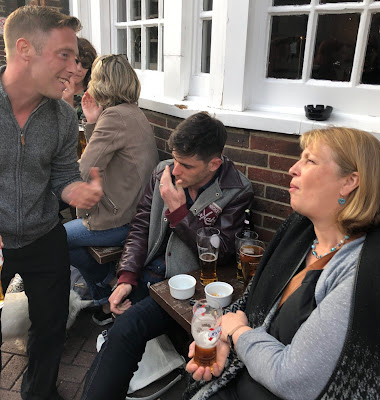