May 22, 2019
A good morning's work, from 7.30 to 1.30 mainly working on the structure of the Nothing compares to you story today, and rearranging bits to help it make sense.

A walk at lunchtime taking in the Hollingbury Hillfort. It is well placed, there is not too much to see apart from curve of the large wall. I was looking at it online and there was some interesting stuff dug up there in the nineteenth century. A torc, which is some kind of neckwear for ancient Britons. Feel a bit agoraphobic on the top of the hill there sometimes, but walked across a couple of drives on the golf course back towards home. Listening to my audiobook of Carrie by Stephen King as part of my ongoing Horror education.

Back had a Victor Frankenstein bout of trying to jolt my marketing project back into life. As I was finishing this, I was phoned by Val in Paris saying she had sent me a little job to do tomorrow.

Was due to see Anton tonight, but he had an important meeting tomorrow so passed. I instead bought fish and chips and watched a film on Netflix called The Girl With All The Gifts. The girl in question was a child zombie, who had eaten her way out of the womb of her zombie mother and kept in cells with other similar children. However this generation of Zombies is much closer to humans than their parents. Despite the zombie business, it was actually quite thoughtful and interesting.

Below the curve of the wall on the east side of the Hillfort, and a torc or torque found thereabouts stolen from a British Museum site. 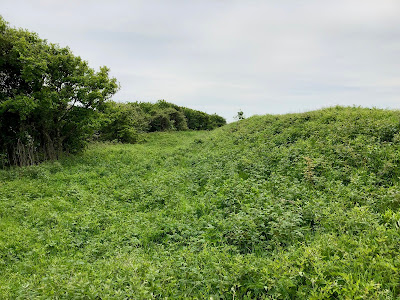 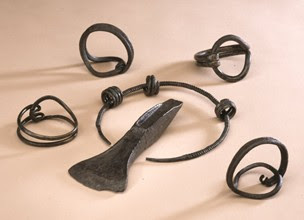 Hollingbury HIllfort The girl with all the gifts