May 11, 2019
Up fairly early to make Lorraine tea and breakfast, then I mooched off to Brighton Station where I met Klaudia. Unlike last year, we were able to simply hop on a train and get to London.  However the tubes from Victoria weren't working, and I didn't face going round Sark to get to Herm on the claustrophobic trains, so we simply hopped in a taxi from there to the theatre.

This found, and our tickets collected, we popped into Byron burgers where we stuffed our faces with natcho starters, and then burgers. I had a C. Rex, some species of monstrously tasty and chicken burger, whereas Klaudia has started enjoying beef burgers, and fought her way through one of those. Sat next to a man with a booming voice, so it was hard to hear each other speak sometimes.

Into the Novello Theatre to see Mamma Mia. We had seats right up in the top of the theatre, looking down on the glittery stuff below. We both enjoyed the show, having our traditional ice cream at half time, despite wanting to burst. It is essentially the same as the movie, but had more oomph being live. The singing was good, and bits of dancing and choreography were fun. Good, simple set. Storyline was just a thread to hang the songs on, but the songs were of course excellent pop. By the time the plot petered out, there were three more songs to sing, and when they just belted these out, the crowd loved it. More importantly, Klaudia loved it too.

Abba earworms for the rest of the day. Delivered my Goddaughter back to Anna. I'd had a lovely day chatting with her, and I am sure I enjoy these jaunts as least as much as she does.

Then I walked down to Beth and John's place, where Lorraine was. They had cooked a curry to John's sister Jo's recipe, and jolly tasty it was too. Had a happy night playing cards and sipping a bit of lager to wash them down with. Home on the bus, and straight to bed.

Below Klaudia, now 15 and the view down to the stage.... A long way down, but still fun. 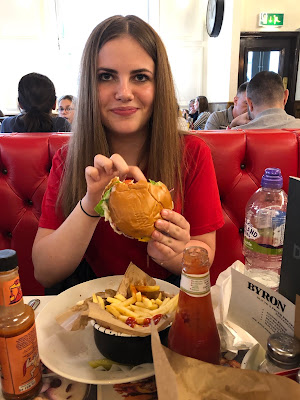 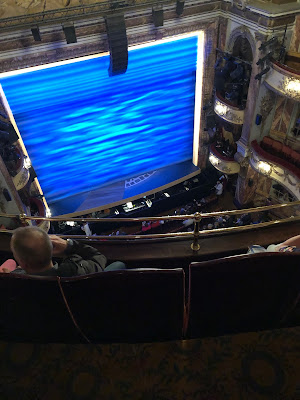