February 08, 2019
Thinking about how Ken lots, and how irrepressible he had been for most of the time I had known him. I would love to be able to believe in a heaven where he is sharing a nice bottle of Blanquette de Limoux with Janet right now.

Apart from this, I wound up the week by posting signed stuff to a solicitor, putting an open to persuasion update on LinkedIn, and readying and sending off a short story to Popshot. This more in hope than expectation, but demonstrating Iron Discipline nevertheless. A chat with Sonia who made me laugh as usual, then off to the gym for a session there. Most enjoyably, I sat in Starbucks afterwards with a notepad, and plotted the first part of this new story I seem to be writing in the horror tradition. It is about twins.

Then home in the pouring rain and straight into a hot shower once home. A quick chat with Anton, sending sympathy about Ken, and then Lorraine home and she immediately began cooking a pepper beef curry This was one of Beth's favourite childhood meals, and she and John came around this evening. A cheery night with Beth and John playing euchre after dinner, which Lorraine and John won by a country mile. John's band have recruited a new woman singer so Matt can focus more on guitar and harmony vocals. Beth has to work on Saturday, so they had to catch a bus early.

A cheery end to a week of mixed emotions.

Below an abandoned umbrella in a carpark. Not a great photo, but there is something poignant about it. 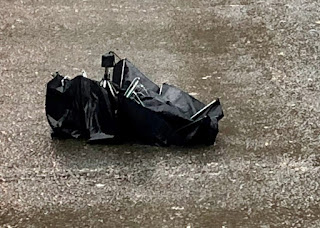