February 17, 2019
Off to see Pat and Maureen today. Drove off into the blue day, a bit of a slow progress today due to speed restrictions and so on.

However, we arrived safely. Ken was there too and was cooking up a big Sunday lunch. Lurking around chatting and watched a Wallace and Grommet film, A story of loaf and death on TV. Maureen had cooked a lovely apple pie too, which was sweet of her. I love apple pies. Had a discussion about apple pie beds. I had always thought these were beds with apple pies in them. However Lorraine explained they are simply beds made with the sheet folded back in on itself so you can't climb into it properly.

I assembled a little plastic greenhouse thing to put Maureen's azaleas in. Lorraine and I had an identical one, so this was fairly straightforward.

Lorraine and I drove home listening to an old Mayo and Kermode podcast about films. Below not a very good picture of Basil blending into Pat and Maureen's new carpet. And some weirdness on the roadside. I think it is a sculpture, or looks like one. 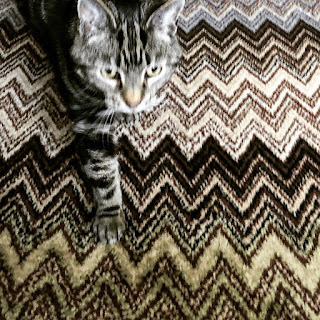 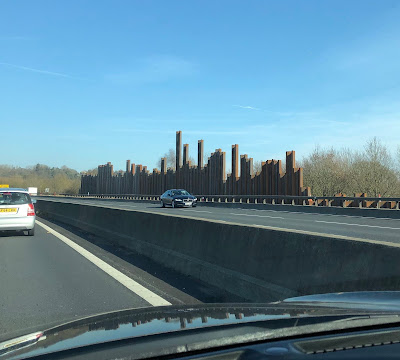