February 07, 2019
Received a phone call from Madeline this morning to say that Rod had let her know that Ken had died yesterday. To be honest while obviously saddened at my old friend's passing, I think that living in a world without Janet was little joy for him.  With his vascular dementia I felt I had been saying goodbye to him by inches for the last few years anyway. Sitting with him while Janet was ill brought back memories of how he used to be, and the good times we had. I feel that I did not let him down, when things got difficult, and I helped him the best I could.  A man with a huge appetite for life, who loved song and languages, and loved Janet greatly. Madeline asked me to send out a note, and Sonia said that it was the end of an era.

In other news, I simply stayed at home today, working on my own bits and pieces.  Shortly after I spoke to Madeline a noticed a strange bird in the tree outside. I snapped it with my lumix to get a better look at it. After I looked it up and it was a sparrowhawk, with its yellow feet and predators eyes. I can't remember having seen one of those before in the garden.  A note from the solicitor asking me to print and sign a letter so the power of attorney thing can be sorted out.

Lorraine home and we had a coconut fish curry.

Below a photo of Ken on his 85th birthday, in November 15, with his pal Bryn, and I; and two snaps of the sparrowhawk. I had my Lumix camera handy on my desk so shot it through my window. 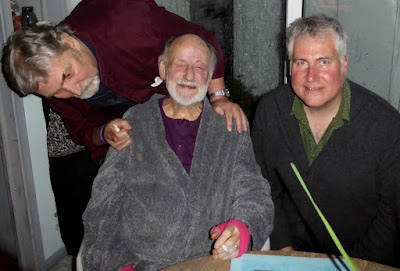 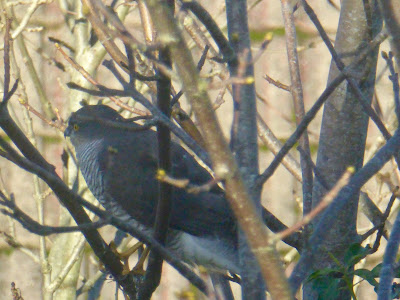 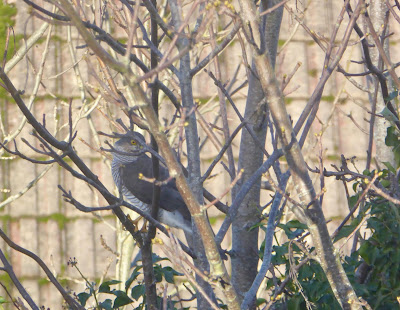