November 27, 2013
A good day, up early and working on the book. Broke off to go to the gym, and while still feeling a bit leaden, it was good to go. Listening to Oryx and Crake by Margaret Atwood as an audiobook as I trundled and rowed. An interesting diversion into speculative fiction, but perhaps not quite as well realised as I found The Handmaid's Tale.

Received a package from Richard, with two parish magazines from Guernsey, Les Tortévalais, and The Townie. Plus a stamp with La Gran'mère du Chimquière.

In the evening off to the Grand Central pub where the Nightingale social group had another evening for dramatic types. I felt uncharacteristically shy, faced with lots of theatrical types. Luckily the man called Kick who ran the event introduced me to a few people, including the man who ran the Nightingale, a woman trying to put on a show about Edith Sitwell and running into problems with the Sitwell estate, two recent graduates who were passionate about theatre and others. So I had an enjoyable evening meeting some intelligent and committed folks, good fun if nothing else.

Below good to see La Gran'mère on a stamp. She looks like she's had some work done. 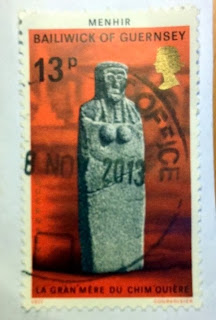