November 19, 2013
Anxious dreams, and a bad night's sleep. I failed to press on with the book, as I find sitting among clutter not conducive to concentration. Unpacked some boxes and in one I found a small collection of old magazines I had been published in, plus a couple of pamphlets purchased by post from the devastating Richard Fleming before I'd even met him.

Otherwise a day short on glamour, and a certain degree of resentful cringing under The Cloud of Things That Must Be Done. For example there was the hour or so taken up with a nice man from DynoRod who deployed a variety of drain unblocking techniques, including a long electrically powered cable which he sent snaking down into the drain. But he went away foxed, and promising a two man team tomorrow.

More successfully, another man came to fix my tumble dryer which tripped all the switches when you turned it on, and so has not been used in the last two years. The man had the back off and found a wire from a bra had worked its way into the thing's innards and was shorting it. This removed, in about thirty seconds, and then my old trusty drier worked a treat. Bargain, and a sadly inevitable consequence of associating with ladies, although Lorraine claims it wasn't hers. Had ladies broken in to my old house and washed their bras there? The mind boggles.

Other than a chat with Mum I lazed pleasantly in the evening, while Lorraine taught school governors, and then arrived home very tired and requiring a gin and tonic.

Below the DynoRod man poking a drain. Sigmund Freud where are you now? 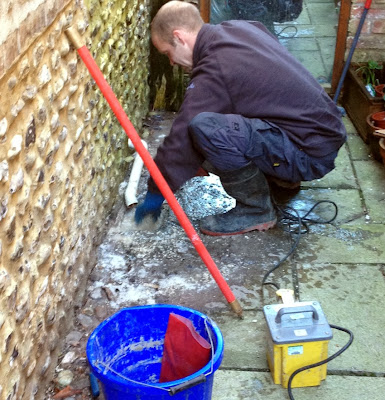