November 10, 2013
Antsy this morning, feeling the need to be doing things. It was a beautiful clear day, and L and I drove off to see Angie and Patrick, former neighbours of Lorraine, in their new house in Hove. They are extending their new detached house and adding a garden office. They live upstairs in comfort, while the the ground floor has been gutted and forested by poles keeping the top floor in place. It is what Angie called a project, and Patrick completely untroubled by having builders milling about underneath him and calling on him for decisions as he worked.

Then to the station to buy a ticket to London, to Sainsbury's to buy food, then to the garden centre for me to buy aquatic plants for the fish tanks then home. Worked downstairs carrying buckets or water about. Emptied the smaller tank completely, and transferred fish into the big tank. Brian, who is much recovered, is a big fish fancier and helped me catch the fish in the tank by batting the glass as I caught them. Removing the tank revealed an unpainted part of the wall, so I painted that. Lorraine and I then hung the Guernsey poster Richard and Jane had given us, which looks splendid and happily picks up the colour of the gold sofa and the wooden floor too.

Lorraine meanwhile in a frenzy of cooking curries with the big balti dishes Pat had bought us. Lorraine cooking up a storm, and I kitchen portered for her, mixing spices, and chopping things. She made enough for two days, so half was frozen.

Below downstairs at Angie and Patrick's house, and Lorraine at the stove. A delicious curry. 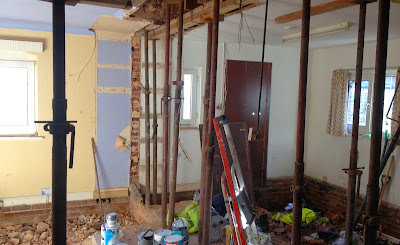 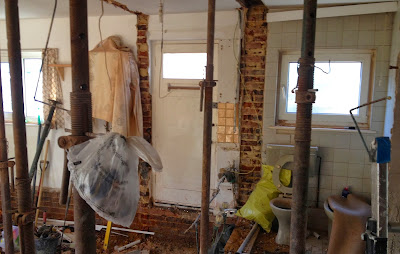 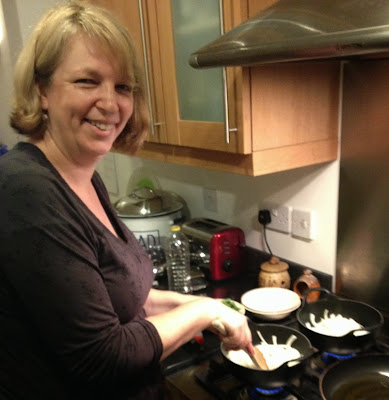 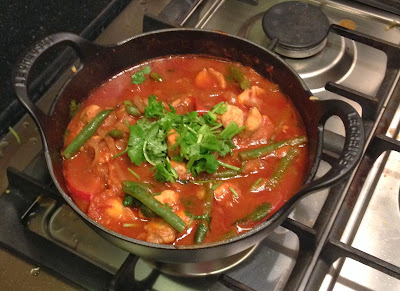