I get married to Lorraine

October 26, 2013
Our wedding day started as usual with the cats plaguing us resentfully for breakfast. A bit of bleary tea sipping as an excited Beth bounded in, and shortly after the flower lady delivered the bouquets. Beth out to collect more gypsophilia as well as arancini and egghogs from the reassuringly middle class Arkwrights. Sam making coffee, and Lorraine and I cooking a large breakfast for everyone, figuring we'd be too nervous for food later.

Then Dawn arrived to take Lorraine, Beth and I in her wee green car, which we loaded with boxes of flowers, candles, table placings, iPod, etc. as well as the wedding cake that the lovely Dawn had made us, and drove off to the Cricketers. People were paid, tables were sprinkled, gypsophilia and white roses arranged, and emergency repairs done to the cake which had shifted slightly in the car.

Then all back home. Sam and Jade had left, and then all the ladies went off to Paul the uber-hairdresser  armed with sparkling wine. While they were there they were surprised by Amy arriving with judicious cups of coffee. In the end Paul did not charge Lorraine for her styling, as wedding present.

Meanwhile I paced nervously about, before jumping into a cab and going up to Anton's house.  Felt much more relaxed being with Anton and the bairns and Anne. Klaudia playing candy crush with me, and wiggling one of her molars in a rather sickening way before it came out.

Here I changed into my clothes. Light grey suit with tails, waistcoat of red and gold, gold and red cufflinks, my pointy Ted Baker shoes with dark red laces, a white winged collar shirt, and a burgundy cravat which, after struggling with in a futile way, Anne came and sorted out for me.  A good deal of nervous lurking about before the taxi arrived, which Anne, Anton, my Godbairns and I all piled into.

Only the presence of my Godchildren prevented me from freely sharing some opinions with the taxi driver who did not know where the Brighton Pavilion (the city's most famous building) was at this point. Oskar then asked me in a serious sort of way what would happen if Lorraine said no, which made everyone laugh, me in a slightly hysterical way.

Then to the All Bar One at 4:20. Feeling rather floaty with nerves at this point. Lots of people arriving there for a sharpener before the ceremony. Mum and Mas there, with Pat and Maureen, Bob, Matty boy, First Matie, Craig and Mel, Max and the French Bloke, Sue and John, Lesley and Jeremy. Matt assured me that the music was all sorted. I sipped a large gin and tonic, which rapidly melted the frozen stress feeling replacing it with a happy excitement.

Meanwhile, at The Old Church Hall, Ed, Kayleigh's boyfriend arrived in a Mercedes to drive Lorraine, Beth and Dawn to The Pavilion. Some colleagues of Lorraine outside to wave her in.

Anton and I walked across to where Sam was outside, suavely ushering people into the building. Richard and Jane, Janet and Ken already there. More people arriving as I gave my details to the registrar.  Then I sat nervously with Anton, breaking off to greet people. Ellie played pieces of violin music, which felt particularly appropriate in the stunning Red Room. Eventually we were asked to stand, and Ellie played the beautiful wedding fanfare that Matt had composed to be played on Lorraine's arrival. Beth and Sam leading the way, then Lorraine finally arriving.

Lorraine looked very beautiful, a gratifying intake of breath as she entered. She had the wild red shoes on, which were very high, the top secret beautiful mid calf ivory dress with a lace Bolero, her hair was all gleamy and gold, and she was made up beautifully. In her hair she was wearing a jewelled pearly headband and was beaming with smiles. She also had a sixpence in her shoe, given her by a teacher from one of the schools she works in.

We said our traditional vows to each other looking into each other's eyes. I thought I might feel all kinds of emotions, or like crying. But instead a huge feeling of happiness welled up in me as I looked at my lovely Lorraine, and we simply beamed at each other. Anton proffered the rings and I tried to put it on Lorraine's wrong hand but this aside all went smoothly.

Time to kiss the bride, which I did with gentlemanly enthusiasm and was kissed back, amid a round of applause from our guests who were our witnesses Dawn and Anton, Mum and Mas, Pat and Maureen, Beth, Sam and Jade, Sophie, Andros and Christof (who had broken off his first term in Oxford to be with us), Bob, Anne, Klaudia, Oskar and Anna, Richard and Jane, Ken and Janet, Sue and John, The French Bloke and Max, Matty boy and Isy, First Matie, Tasha, Brian, Kayleigh, Craig and Mel, Lesley and Jeremy, Rachel, Andrew and Libby, Helen, Matt, John, Rosie and Cath.

The signing of the marriage certificate, photographed by Talib. Lorraine and I were then led to the beautiful Music room where a series of photographs were taken before we were led out to walk across town.

Slightly nervous about this as the weather was in treacherous mode, and it spotted with rain as Lorraine and I left the Pavilion. Amazingly it held off, and we followed Sam, leading the way nonchalantly smoking a cigarette as we walked through the lanes. A somewhat dreamlike experience, being flash photographed like celebs by Talib with people looking out of windows at Lorraine and I, and a small group breaking into applause as we passed them.

Then to The Cricketers, and pushed through the throng at the bar and made our way upstairs to The Greene Room where glasses of prosecco were poured. Once we'd got everyone inside, Sam made us a handsome toast, and I said a few words thanking everyone for coming on behalf of myself and Mrs Peter Kenny.

The caterers did us proud with the buffet, with a mixture of hot and cold food, gourmet mini-burgers, bacon and maple syrup sausage rolls, parmesan and black olive pastries, mini fish and chips, smoked salmon blinis and lots of other stuff.

Then it was time for our special dance, which is rather toe curling, but we squeezed each other to Al Green's Let's Stay Together. Some dancing then kicked off after that, which continued sporadically through the night. I danced, ladies shook tail feathers, and other people cavorted about.

Later came the cutting of the cake, which Lorraine and I stabbed unceremoniously. It proved to be delicious. Then Beth, accompanied by Amy on guitar, sang beautifully and movingly a song called Lovesong (written by The Cure) which was a lovely surprise. Lorraine crying. Later Beth, and Amy sang some Motown covers too, which everyone loved.

Another surprise: Dawn, Angie, Helen and Sarah (Lorraine's former Compton Road posse) then read a poem that Dawn had written celebrating our marriage.

Meanwhile lots more friends had arrived, including Paddy I was at school with, Glenda and Richard, Tanya and Catherine, Wayne, Richard and Maria, Claudius and his family, Steve Cartwright and Dipak, Lynn and Malcolm, Jess and Andrew, Lesley and Derek, Tracey, Carolyn, Irish Tom, Laura, Angie and Sarah, Clare and Reuben.

Lorraine and I had so many lovely conversations, hugs and congratulations. Just a lovely evening with so many wonderful people.

Lorraine and I, with Beth and Laura, eventually poured into a taxi at around two o'clock. Home and Lorraine and I getting ready to slope off to bed, as Laura and Beth set off to go clubbing. Exhibiting the hardiness of youth at 2:30am. I sprawled on the sofa, and Laura had helped me off with my shoes.

And so Lorraine and my wonderful day ended with us repairing to bed, man and wife.

Below Lorraine arrives outside, greeted by Sam; Lorraine entering the building; Anton, me and Dawn waiting for Lorraine to arrive; Lorraine walks in; during the vows; I sign on the dotted line; our guests inside the Red Room. 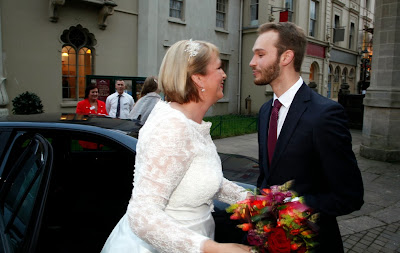 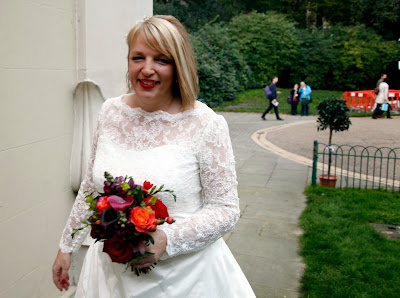 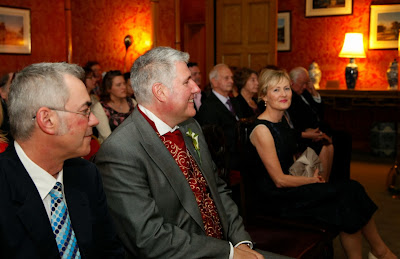 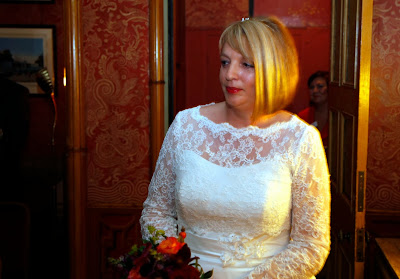 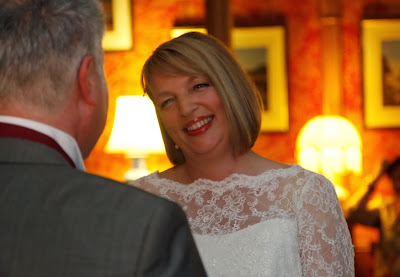 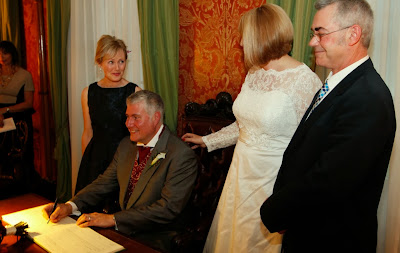 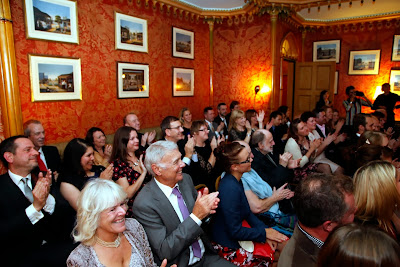 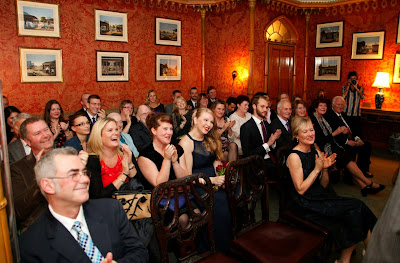