October 10, 2013
The season changed today. From the balmy last few days, the temperature has dropped, and it is feeling properly autumnal. I love this time of year.

Finally reached the end of the first draft of the book just after lunchtime sitting in Starbucks. Gave myself a pat on the back for about five seconds but too aware that there are pot holes to fill in and a damned hard edit required to celebrate yet. But proud of my effort if nothing else. Currently A Galaxy of Light-bulbs, stands at 61k in length.

Finishing touches done in Starbucks today, and then sloped down to the sea to have a quick walkabout. Looking from the Clock Tower looking down West Street, the clouds appeared to stripe the sea. The sea is always up to something. Did my 10,000 steps, though this cold is making me a bit wary of the gym.

Came home and shuffled though the folder of old poems typing in scraps and second rate rubbish. As an exercise in focusing on all that is bad about my writing, this was a really good one.

Spoke to Carl, who was making me laugh with a story about Jayne barging everyone out of the way in her wheelchair to get a cuddle from Russel Brand the comedian at his gig they saw recently. Apparently he smelled nice.

Another long and grueling day for Lorriane. Penultimate day of Frasier, the last CD of the last series. What can I watch after that to keep me sane?

Below, the summer, last seen heading in a southerly direction. 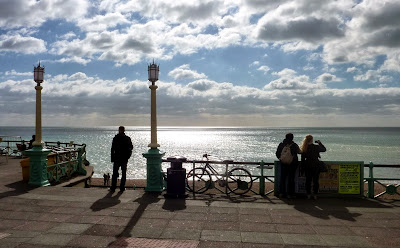 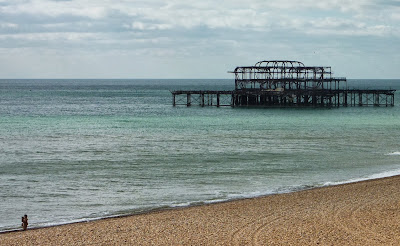 A Galaxy of Light-bulbs Carl