October 31, 2013
Last day in the Barbarie. Lorraine not wanting breakfast this morning, so I strapped on the nosebag alone, reading the paper. Andrew Coleman came and said hello, enquiring after Mrs Kenny. Lorraine is enjoying being called Mrs Kenny at the Barbarie, after several years of being there as my fancy woman.

A walk once we'd packed, back to Icart and a short turn on the cliffs. Tried out the panorama function on the iPhone. Both of us feeling quite sad to be leaving so soon, but so happy to have had this break and time together after all the frenzy of the last couple of weeks.

Back to the Barbarie for a ham sandwich, where I found I could not resist a final pint of beer. Then a taxi to the airport. The flight home obnoxious, the plane bouncing and bumping around. (The pilot had claimed it would be a 'relatively' smooth flight, a weasel word if ever I heard one). I hate not being able to see anything through the window, other than cloud, but when you can see nothing my imagination gets to work. Mercifully short though.

Collected the car, and Lorraine drove us home. The cats happy to see us, and actually really nice just to be able to collapse on the sofa. I cooked up a bit of pasta and great to sip mineral waters and teas. Went to bed shortly after nine, both feeling ready for bed, having been untroubled by trick or treaters.

Below two panoramas (click them to make sense of them) and the last glass. 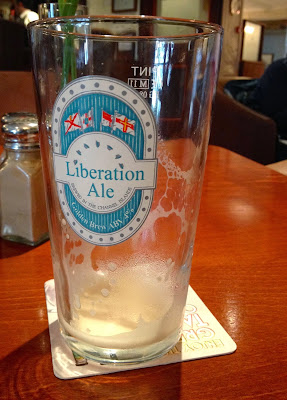 Unknown said…
This comment has been removed by a blog administrator.
3:27 pm