December 06, 2014
Saturday, thank God. Managed a much needed lie in before the cats grew pesky, and I sidled down the Ghormenghastly stairs of New Kenny Towers to the kitchen to appease them and make tea. Then, soon after Lorraine and I were up and at 'em, driving around buying paint and other stuff as well as Trading Boundaries where we bought a throw, golden in colour, which Lorraine has fashioned into a harem-like hanging which now shields the north of Brighton from seeing us clamber into bed of a night. There was also a small exhibition of signed Hipgnosis prints of album covers by the likes of Pink Floyd and Peter Gabriel, including the famous prism cover of Dark Side of the Moon signed by Storm Thorgerson.

Then home to spend time filling the holes and scars in the walls and then spent the evening watching a ridiculously stupid film called Battleship, where mighty transforming alien craft take on navy ships or something. Really stupid. We also guiltily ate fish and chips again, rather than cook. At last too, I was able to watch Match of the Day, for the first time for many weeks, only to see Chelsea get beaten for the first time this season.

Below always liked this shot, scratch, for the cover of the second Peter Gabriel solo albums. 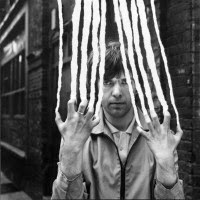