December 16, 2014
Leg noticeably perkier having not used it to hauling things up and down stairs for a day. A boon. Lorraine working from home all day, which was splendid. A long chat with Matty boy, who I'd not caught up with for some time. He, Isy and the bairn are now happily installed in a new home in Brentford.

In the afternoon hopped on the bus to meet Helen Russell in Hove for an hour and a half. Enjoyable meeting, and Helen's an interesting person. We sat at the piano and she played me some of the music she had been sketching. It all sounded coherent and often very melodic with a gorgeous 12 tone passage - and she has strong ideas for the piece, an oratorio or opera. Interestingly we seem to be on the same page when it comes to what we have read. She mentioned Heidegger, and Levi-Strauss for example, and we talked at length about mythology, and I showed her how I used mythology in my work, for example in the Minotaur piece. She was also complimentary about the work Matt and I had done together, and she completely got the idea of a concert falling in love with its listener. We have decided to explore some ideas together.

Hopped back on the bus and came home, did some general computer based tinkering, then mended the door into the dungeon, whose doorknob had come out on a stalk, and cooked a damn fine dinner even if I say so myself. Lorraine and I greatly diverted as I stirred my concoctions by an e-card featuring Jane and Richard apparently in the guise of festive reindeer dancing to La macarena.  Richard is also a featured writer here, looking as devastating as ever.

Also, Joan has been doing a bit of blogging, adding photos taken on her holiday with Toby, Romy and Dick in Patagonia. Have a look at them here.

Below Richard and Jane. 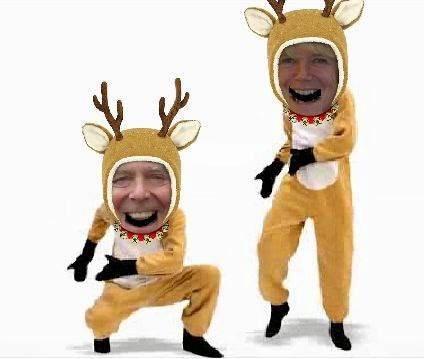