January 31, 2019
Again, more positive for most of this last day of January. Working on a small poem I'd started a few days ago about snow, and spent the morning sending out queries for my children's novel to five new agents. Afterwards I saw on Instagram one of the people I had attended the Children's event with at Bloomsbury and saying that every rejection felt like a step closer to acceptance. Love the optimism there.

In the afternoon a watched the second half of a brilliant documentary featuring Antony Gormley looking at How Art Began, featuring cave paintings by Neanderthals all the way to Australian rock art. A beautiful and eye opening documentary. This subject matter really excites my imagination, which has been keen on this ever since I read a book called The Mind in the Cave.

Went out for a walk up to the golf course on the edge of the downs. Bitingly cold up there, and the snow clinging on, and getting ready to be refreshed.

Lorraine home early to beat the snow, and I decided not to go to Lewes for a friend's book launch at the last moment. Feel a bit bad about this, but frankly didn't fancy travelling through the ice and snow. I will find a way to make it up. Instead we kept warm on the sofa and ate salmon with stir fried veggies and noodles.

Note from Madeline last thing, saying the solicitor is asking for copies of the Power of Attorney I had for Janet. I have some documentation relating to it, but after some searching cannot find the actual POA itself. This Janet business keeps finding new ways to be rile.

Below snaps on the hill. Noticeably chillier up there... the weak January sun, and a lone figure in a snowy field. A new lot of snow saw it settling here as well... A snap from the front door and from our bedroom later on. 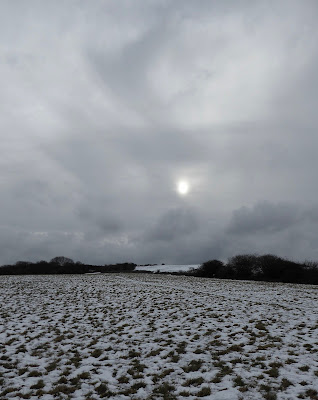 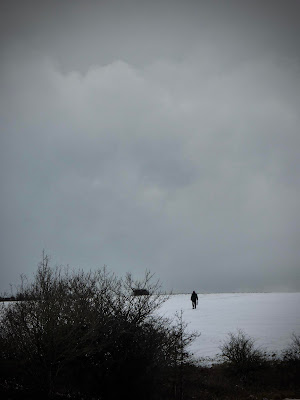 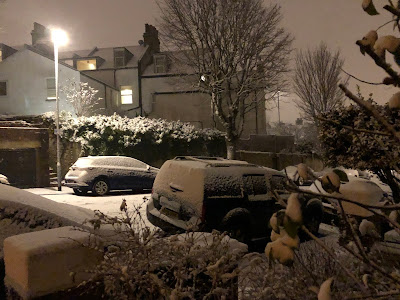 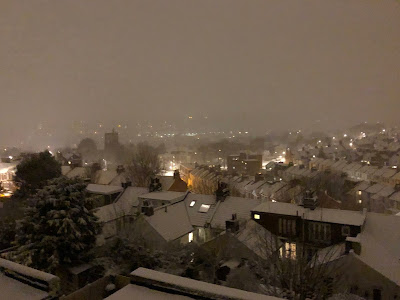 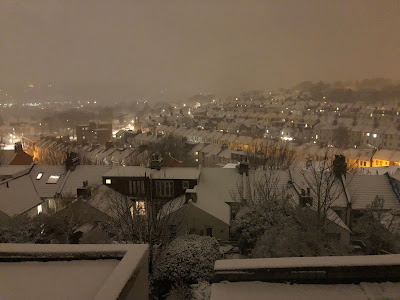