An interlude by the river

January 23, 2019
Forwarding more notes to Janet and Ken's friends today. Then a bit of a nasty interlude when I got a letter from HMRC forwarded from my accountant saying that no tax had been paid. I phoned the tax folks and sorted it out, but had to wait almost twenty minutes before I could speak to a human. I had paid it into the wrong account. A very nice taxman on the end of the line however. Not so impressed with my accountants, who failed to give me the right information in the first place and then forwarded the HMRC thing over without comment.

Otherwise a fairly nice day. Chuffed up to Richmond where I had not mooched in many a year. Went to the White Cross where I met Keith for a beer and a chat. He was telling me a horrific diving story where he got lost without a torch in the murky black under a shipping lane in Weymouth and feeling panicky and running out of air, having been separated from his dive partner and disoriented he headed  towards a light underwater, which was another diving group, and then found which way was up. Horrible. Anyway, he said at the end of the story, I want to take the girls diving. He has twin daughters, who are mad keen swimmers.

Home reading Let the right one in, an enjoyable horror novel, which is cited as a modern classic of the genre by John Ajvede Lindkvist.

In Brighton after eleven, and walked home eating half a bag of chips on the way home.

Below a view I had not seen for a good while, towards Richmond bridge from inside the The White Cross, featuring the slipway into the river where I have seen several cars parked, then drowned as the tide comes in. 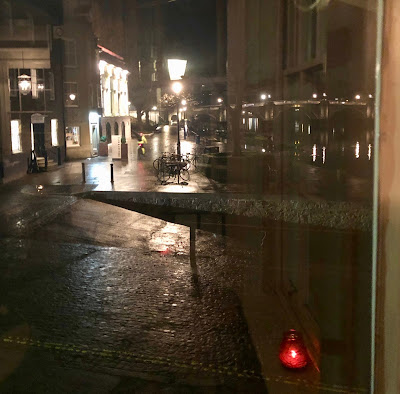