January 25, 2019
An early breakfast, Lorraine phoning Sam and discovering that he was on his way down to Brighton, which made her very happy. I pottered about this morning, sending more poems off.

Then I met Madeline for lunch  at Fourth and Church again, really good food in there, and quite sedate. It is were hipsters in their seventies seem to go, and they must know a thing or two about food. Delicious tapas style grub. One dish really great, a black bean mole sauce chorizo dish, with chocolate and nutmeg in it. Madeline paid, which was sweet of her. Hopefully I can buy her the next one when I am not pinching every penny. We went into Janet and Ken's house. Even though they are not there now, it still smells like their house. I am pleased we were together, which normalised it.  Madeline had a few bits to collect, and we looked at Janet's academic papers, I had not realised she had authored or co-authored so many of them. While we mentioned each other's writing, our conversations were so wide-ranging we rarely dwelt on this. These papers will be collected as an online archive soon.

Bussed home as there was a possibility Sam would turn up early.  Found a package full of socks from Maureen and Pat, my Christmas present which had gone astray. Each with a message about the  working week on them, starting with Dreading Monday, and ending with Feel Good Friday.

Lorraine home quite early, and we walked into town where we met Sam in The Basketmakers where we had dinner. Good to see him, and he was killing many birds with one stone, he saw his Dad in London, and met up with his pal Alessandro who was visiting Brighton, we saw him for a couple of hours, and then he went out with his pals, and stayed over at our place. Made Lorraine's week to see him. Toby phoned when I was in the pub too, but it was too busy and noisy to talk to him properly. 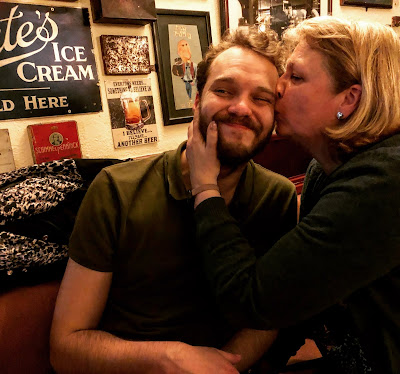