September 28, 2013
Off to Hove with Lorraine this morning, getting parking permits from Hove Town Hall, and walked back into town. Past the protests outside Ecostream, who seem to have a factory in Israeli occupied territory, so the Brighton Palestine Solidarity Campaign stage a regular protest. Just as regular as the  counter demonstration of pro-Israeli supporters. This ensures that it is always shouty on Western Road on Saturdays with Palestinian and Israeli flags somewhat incongruous among the largely indifferent shoppers.

To Shana's, to see Betty for a few minutes during her lunch break, having taught a Shrek-based comedy session in the morning. She had worked into the small hours the night before in her pub job, and had a similar session to look forward to tonight.

L and I off into town and bumped into Wayne whose party we are going to later on in the evening. L and I then off to talk to the jewellers, who after some milling about having apparently lost the order, then produced the rings.

In the evening off to a pub called The Globe to celebrate Wayne's fortieth birthday. He had booked the bar downstairs. Wayne on great form, and looking tanned and rested after a couple of weeks in Spain. A cheery night chatting with members of his family, with John and Linda, and others. Wayne's colleague Emily was there, and she is a lively girl, introducing Lorraine and I to the joys of the Jägerbomb, which is a glass a third full of Red Bull into which you drop a shot glass of Jägermeister, and swill down its noxious mix of caffeine, sugar and boozes. One of these proved enough.

Home late, and firmly steered past Ace pizzas by Lorriane.

Below a snap of urinal ghosts, reflections in the marble. I blame the Jägerbomb. 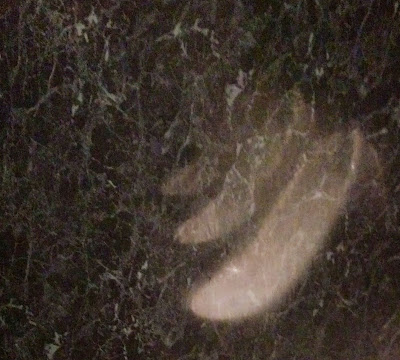