September 25, 2013
Woke up early drenched in sweat. Up early and dealing with stressful house stuff. Nothing coming easily at the moment. To the gym where I managed to get find some equilibrium on the rowing machine and cross trainer.

Read the first chapter of Digging the City: An Urban Agriculture Manifesto, by my old friend Rhona McAdam in Canada. Really well written as you would imagine.

Home and another futile struggle to make progress for an hour or so before hoofing off to Klaudia and Oskar's school, where I chatted to Anna, my co-Godparent, before the bairns emerged from creative writing (Klaudia) and chess club (Oskar).

Cooked pasta then sat about watching DVDs of Sabrina the Teenage Witch as they syphoned it up. Klaudia writing a new story in her book and told me she has just started learning German, and guitar.

Lorraine arrived to see the nippers too.  I shepherded Oskar to bed, looking at his planes hanging from the ceiling, and reading a Cars story to him. A quick gobble down of the fish and chips Lorraine brought (I had to eat before 8) then a Horrid Henry story (about a terrible babysitter) with Klaudia. Sat about till Anton got home from London.

Below some of the squadron above Oskar's head. 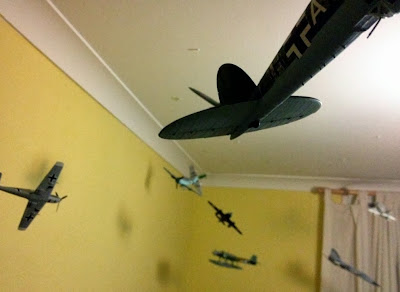 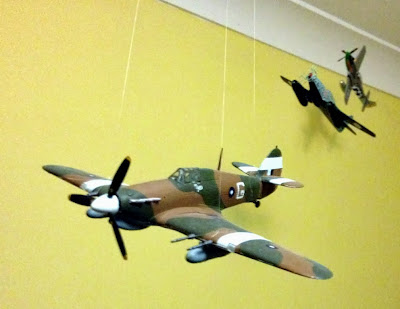