A voice from the past

September 19, 2013
Another two hermetically sealed days, spent working on the book. I opened the air lock only to slide off to the gym for an extensive work out yesterday, and to sit in the Starbucks and work for a few hours for a change of scene today.

Paid the registrar people for the wedding, and Lorraine and I spent a bit of time discussing vows. We are going for traditional ones as I have a strong aversion to the idea of writing them myself due to the busman's holiday aspect of it all. I don't want to be hearing a word and wishing I'd used another one while I'm getting married. I simply want us to get married.

Turning on the radio when I got home, I heard the unmistakable voice of my personal tutor when I was at Warwick, Martin Warner. He was talking on the Radio 4 about agony, employing Nelson Mandela as an example. He sounded no different to when he used to teach me and Sophie years ago.

Stood there beaming as he spoke, and then wishing I had been a more worthy student of such a fine teacher. Here's a photo of me, Sophie and Martin at his retirement do in 2005. Such a nice man, who clearly has a Dorian Gray portrait somewhere in his attic. 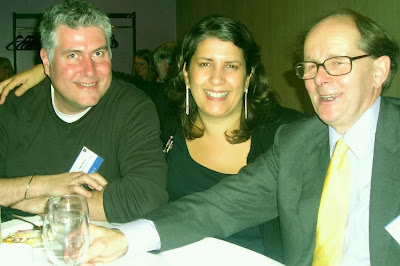