Hippy in a bottle

September 16, 2013
Back to the book. It always seems to take a day to pick up the threads, but feeling good about it. Writing about technology, and reading about stalled product launches, such as the HP Touchpad, launched to rival the iPad, which in 2011 lasted a mere 49 days on the shelves.

Spoke to Mum and broke off in the afternoon to go to the gym, more on the rowing machine this session.

My desktop computer acting erratically, and may be getting ready to self-destruct. I have a complete backup, as well as all the important stuff also on my laptop just in case. Lorraine out in this evening singing with her choir learning some rock songs like Message in a Bottle and Running up the Hill, I watched some Frasiers and watched an interactive video Toby told me about.

I also seem to have a new craze which is piecing together using Google bits of personal history. I found a photo of an art teacher of mine in 1973. His name was Dave Housden who was at the time a friendly, gentle hippy. I was even invited to his house near the school to listen to a new Yes album Relayer I had bought. We talked about music a good deal together and I seem to remember he was a big Pink Floyd fan. 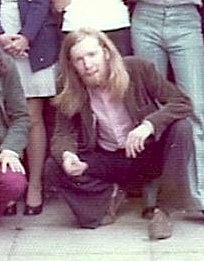